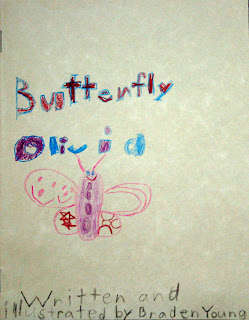 Last week, I wrote about the imagination and creativity lesson I had learned from my son while we brainstormed ideas for a picture book for his first grade teacher's new baby girl.

In lieu of any announcement that one of my own picture books has been picked up for publication, I'll instead announce that Braden's picture book is a wrap, and was turned in to the homework basket this morning.

Yesterday, as he was finishing the last drawing, I excitedly announced that I was running to get my camera so I could take pictures of his very first picture book. 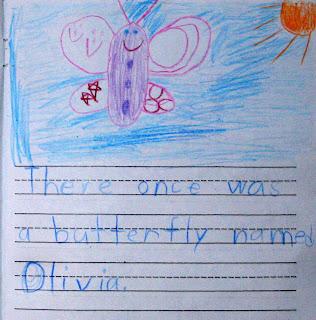 "Mom," he responded matter-of-factly, "it's not my first one. I've done another book at school." Such a pro, that one.
I might be overly-excited and, apparently, have much to learn about the inner workings of the first grade ... but I was still very proud of him. So, I grabbed my camera and started shooting. 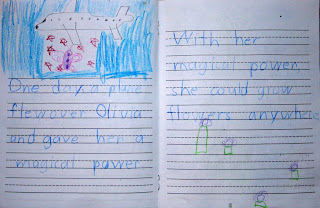 Not bad for a first (excuse me ... second) picture book attempt by a first grader. I love the vivid colors ... and, can you see the butterfly? She looks the same on each page ... not easy when each of her four wings features a different pattern!
Now ... the picture book writer in me is wondering if this can be developed further ... into a 32-pager?! 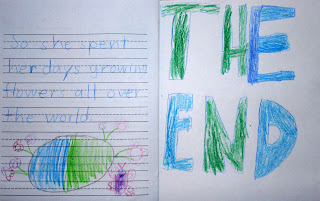 I think I'll add it to my idea list ... because, as my son says, "You just never know!" (That's a whole other post for another day!).
Hope your day is filled with creativity, imagination, and vivid color!
Posted by Kelly H-Y at 3:27 PM

I love his big "THE END". And kids are geniuses, aren't they?

That was just adorable! Thanks for sharing.

Adorable! Ah, to be young... before our inner voice grew loud with negativity and filled the once quiet, self-assured spaces with "I can't do that" whispers... oh, is that just me? sorry!

Beth! Thanks for stopping by!

Adorable! A very creative butterfly...takes after your son.

I have not taken photos of my five year-old's first picture book, The Princess of Skating. But we read it a few times a week and she keeps asking when I will photocopy it so she can sell it door-to-door. She says she knows at least two people who will buy it, so it's sure to be a bestseller!

An artist and a wordsmith I see. Nice going Braden.

Tara - Thank you! I LOVE the story about your daughter ... what a little entrepreneuer!!! That's so cool!

So cute, And, look at that. We both wrote about butterflies. Thanks for your thoughtful comments on my blog!

adorable :_ thanks for stopping by :)