Last month, on a very cold, snowy night, with the gas-powered fire pretend-crackling and a million things to do before Christmas arrived, I was quickly flipping through the television channels in search of something entertaining to keep me awake while I accomplished ... well, lots of stuff.

I found "The Sound of Music" and was totally drawn in ... I got nothing else done for the rest of the evening, and went to bed way past the time I had hoped for.

Yes, I've seen it a dozen, maybe more, times (though never from start to finish); yes, I know the story (though, for some reason, the details of their escape ... well, escaped me ... so I had to stay up until the very end to refresh my brain on that little, useless detail!); yes, I know the songs ... but I still had to watch it. Maybe because it is such a gentle, hopeful movie about the love of family, standing up for what you believe, and holding on to the hope that "when the Lord closes a door, somewhere he opens a window..". But, I think it's also because it reminds me of my time as an exchange student in Austria, including a funny little incident involving a certain gazebo in Salzburg. 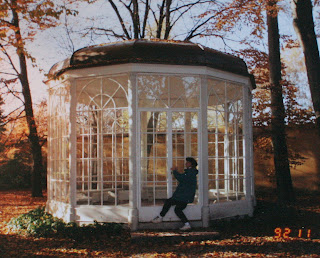 We traveled to Salzburg in November. My most vivid memory is that of hillsides jam-packed with trees in every shade of Autumn you could possibly imagine, against a brilliant, clear-blue sky. It was like walking into a painting. It was gorgeous.

I also remember our long and comical search for the famed gazebo from 'The Sound of Music'.

Just when we were about to give up looking, we found it. LOCKED! Hours of walking ... and it was locked. I could see inside, but it wasn't the same. I wanted to be inside ... where they had filmed that touching scene between Maria and Captain von Trapp.

So, as you can see, I did what any reasonable college student would do ... I started pulling and yanking on the door. Not that I thought I would get in ... my roommate and I were laughing to the point of tears when she took this picture.

Nonetheless, I still do believe that when God closes a door, somewhere he opens a window ... just not the one to 'The Sound of Music' gazebo.
Posted by Kelly H-Y at 1:40 PM

It makes a way better story that you didn't get in!
What a great memory!

Kelly, NO WAY!!! I had NO idea that magical gazebo was real... you should write this into a little article!!! I love this post...

You are so right, PJ ... there would have been NO story without that locked door! So true and, yes, such a fun memory!

Susan! Yes, it's true ... I was amazed too! Thanks for your suggestion about it becoming a small article ... I love that idea!

What a great story! I'm glad you didn't get in (sorry) because I'm not sure I could have taken a story about you INSIDE singing, "I am sixteen, going on seventeen" at the top of your lungs! Great picutre!

That's hilarious! And so cool that you got to go there. That's one of my favorite movies EVER.

I guess that's why you brought me the Beauty and the Beast soundtrack in German vice The Sound of Music. ;)

Jayne! I'd totally forgotten about that ... too funny!