On the 9th Day of Christmas

Happy 2009! Every year, I forget that the 12 Days of Christmas doesn't fall on the first twelve days of December; nor on the twelve days leading up to December 25 ... but, rather, begins ON December 25, lasting through January 5 ... which is then followed by Epiphany on January 6. My New Year's resolution this year is to remember this little tidbit come December 2009!

Remembering this fact about Christmas made me happy. Personally, I don't like the thought of all the happiness, peacefulness, generosity, thoughtfulness, and kindness ending abruptly on December 26. I like the thought of Christmas (and all of its wonderful qualities) 'officially' spilling into the New Year. I'd like to think that people could just act like it's Christmas ALL year long ... doling out extra smiles, giving generously just because it seems like someone needs a little something special ... all that good stuff.

I'm not sure everyone sees things the same way, as was slightly evidenced when we ventured to Target the other day. The parking lot was FULL of cars which, for some reason I can't quite explain, surprised me. Drivers swerved quickly into coveted parking spots, ensuring they made it there before the driver coming from the opposite direction. And the line of people waiting to return Christmas gifts ... I didn't see a whole bunch of extra smiles. We were just there for deodorant and laundry detergent. I actually debated, for a moment, whether the potential for B.O. and dirty clothing was worth maneuvering through the crowds. Those being my least favorite things, however, I decided to proceed.

Despite the fact that Christmas is still officially 'on' ... we took down our decorations yesterday. It was necessary, really, as we are traveling again this weekend for a Christmas celebration with the other side of the family; and, when we return, it's immediately back to meetings, work, and school.

I love Christmas decorations ... so, taking them down is bittersweet. I miss all the lights and sparkles they bring to the home. But, the clutter-phobe side of me secretly enjoys it. Our decorations take up about 4+ large bins ... so, removing that much from our house makes it seem kind of ... empty ... and ultra-clean. Not that the Christmas decorations make it seem cluttered or anything ... it's just that the removal of all of it makes the house seem more open than before.

Of course, my poor children then have to deal with the rotation of toys (see 'clutter-phobe' comment above). Obviously ... there was sufficient 'in with the new' this Christmas ... and, in my house, that means 'out with the old'! Have you ever noticed that a toy not played with in approximately 9 months will suddenly become a child's FAVORITE toy the minute it's about to join the 'to be donated' bag?! It's quite a phenomena, and is currently happening in full force in my house.

Speaking of 'in with the new' ... check out the expressions of joy on these faces! Isn't that the best? Did you get a gift that gave you a similar expression this Christmas? I hope so! 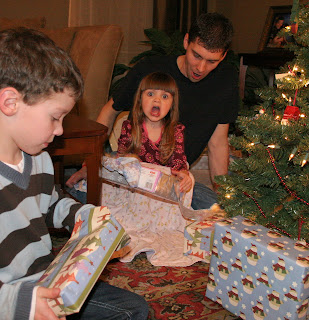 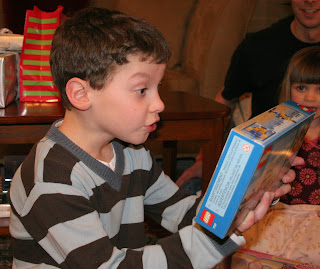 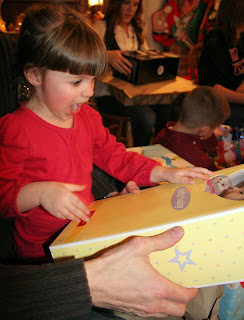 PJ! I know exactly what you mean!! Happy (and Clutter-Free!) New Year to you!

I love getting them up, but I hate taking them down. This is a huge part of why I wait until after epiphany. When I was in Switzerland for Christmas they did that and I thought, "Hey, now I have a great excuse to leave my decorations up another week longer!"

My children used to react the same way with toys that they haven't played with in forever. Now they're getting a little older, and they're better about wanting to give things away.

You know, my husband wants me to take down the decorations and it KILLS me for that reason. I get grateful this time of year, and the lights and such are a great reminder to keep that frame of mind. O well... until NEXT year!!!

LotusGirl - Good to know things will get a bit easier as they get older! :-)

Cari! Yes ... I can definitely understand the 'walls closing in' feeling! Very much so!

Susan! I agree! They are such a great reminder ... that's what makes it so hard to take them down. And ... when you go for walks at night ... it's just not as bright and cheery ... it almost seems dingy without all the lights.

Kelly, I feel just the same way about Christmas coming to an end. I still have one--no, two--decorations up. My card display thingy and a Christmas tree wall-hanging quilt. Can't seem to bring myself to bring them down just yet!

Thanks for stopping over at my blog!

Hi Rebecca! Thanks for stopping by! You reminded me ... I too have the Xmas card display-thing still up ... I still enjoy looking at the cards! And, ironically ... a Christmas quilt as well ... my Mom made it for me as a Xmas gift, and I couldn't bear to pack it away right after receiving it. Besides ... it has snowmen all over it ... that's wintery ... and we're still in the midst of winter! :-)