It Appears My Ban is Over 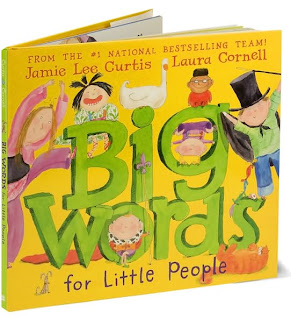 I had a secret plan to not allow them into my house ... you know, the children's books ... written by celebrities.

OK, I admit ... I've stood in the corner at Barnes and Noble once or twice ... maybe five times ... and read a few of them. But, from what I'd heard, I was pretty much not supposed to admit to liking them (even though I kind of sort of DID like them).
After all, how can someone like me compete with the likes of Jamie Lee Curtis, Madonna, Katie Couric ... and the list goes on ... and on. I mean, really ... it seems like every time you turn around, a celebrity has written a children's book. And, why wouldn't publishers jump all over that?! Their books equate to instantly successful marketing ... just like that! These people can easily land an interview on the Today Show and sell gazillions (OK, maybe a little less) of children's picture books in the blink of an eye. It's quite amazing ... and a bit daunting!
So, I figured I would keep plugging away at my own efforts, and - in the mean time - not contribute to the mass purchasing of said children's books.
Then, it happened ... my children were given two celeb-authored books for Christmas. One by Jamie Lee Curtis ("Big Words for Little People"); and the other by Sarah Ferguson, the Duchess of York. "Goodness," I thought to myself as I watched wrapping paper fly across the room, "now I'm competing with celebrities AND a DUCHESS!"
So, I'm here to admit that I like them. The stories are adorable and the illustrations ... well ... they're just phenomenal and bright and cheerful. 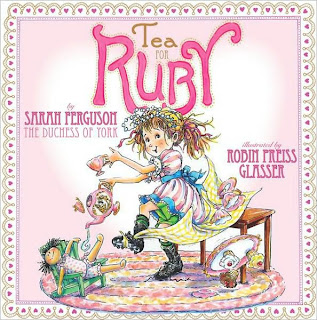 My daughter's favorite is "Tea for Ruby" (that's the one by the Duchess!). The story line is very simple and sweet. But, oh my ... the illustrations ... I just stare at them and wonder how long it took Robin Preiss Glasser to complete the intricate, detailed drawings. They're amazing.
So, I guess my ban on celebrity-authored books is officially over. I probably won't purchase any, but I will allow them to enter my house. :-) After all, while their books may have taken some of ours out of the running ... they've also done a huge service to the industry by turning the spotlight on children's picture books. And that's a good thing for everyone ... especially the kids for whom we write!
In the mean time, I'm going to re-read "The Non-Celebrity's Guide to Getting a Children's Book Published" by Jon Bard, Managing Editor of The Children's Book Insider, LLC (http://www.write4kids.com/). It's a refreshingly straightforward look at how to get published when you're only a celebrity in your own small circle of the world!
Happy writing!
Posted by Kelly H-Y at 11:44 AM

Great post! I'm trying to get a memoir published, as you probably know, and oh the times I've said to myself, "If only I'd written a celebrity memoir." I certainly wouldn't still be waiting around for a yes. It's cool to know you enjoyed these books, though. I hadn't checked them out, but I had thought they might be good. Jamie Lee Curtis always has interesting life lessons to share on Oprah at least. :)

Like you, I've shunned celebrity books. I just assumed the writing itself would be below par and that they were producing a book because, well, "anyone can". (yeah, right.)

But I see now that I shouldn't have made that assumption. Just because someone is a celebrity and has an instant "in" with publishers (sob!), doesn't meant they CAN'T write a great book.

Thanks for making me think!

Glad you enjoyed our ebook! Anyone else who'd like a copy can go to http://www.write4kids.com/nonceleb.pdf

Funny that you posted this today, because I read my very first Jamie Lee Curtis book about an hour ago at our doctor's office! It was cute in an entirely "plotless" way. She is supposedly the best of all celeb PB authors though.

Serenity ... so good to hear from you! I have no doubt you will hear a 'yes' on your book ... and hopefully soon!

Jon - Thanks for visiting and for the link!

Corey - Oh my goodness, how funny is that ... you literally must have been reading her book while I was writing the post!

I don't purchase them, but if they make it into the house and I like them, they can stay :)
These do look adorable!

But I don't really have a problem with celebrity-written books. Not all of them, anyway. It seems like the one by Fergie is something near and dear to her heart. Celebrities may actually have more time and access to write a book than others.

It's some like, say Lauren Conrad's tween book, that I have a problem with. Those who use their celebrity to excuse the lack of real talent...ugh.

My daughter has Tea for Ruby. I'm not even sure where it came from, but it IS a cute book. You're right that celebrities do help the industry. I'm still not forking out money for Madonna...doesn't she have enough already?

I just got the Big Words book from the library! But haven't read it yet. Jamie Lee Curtis totally sold me on her adoption book. I even bought it (gasp!!). So I knew I could trust the former-porn-star... wait a minute....