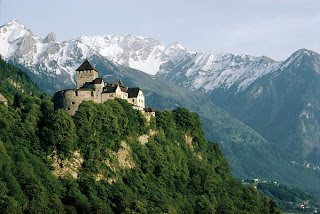 For some reason, I can't find any of my photos of Liechtenstein. I think this one, taken by Volkmar K. Wentzel, will suffice. Actually, it does much more than that ... it pretty much sums up all you need to know about the Principality of Liechtenstein ... it is stunning!
Have you heard of it? Liechtenstein is tiny ... 15 miles long from north to south. It is the sixth smallest country in the world, tucked right in between Switzerland and Austria. It may be small, but it packs a BIG punch! I'll spare you the general facts, and share with you some of the things I found fascinating.
My trip to Liechtenstein was the most relaxing part of my study abroad experience. I was finished with school, my finals were behind me, my bags were packed, my friends had flown back to the U.S., and it was almost Christmas. I had several days to kill before my flight home, and just happened to know of a family in Liechtenstein (I'd met two of the brothers through my step-sister the previous summer!), who had encouraged me to contact them if I was 'ever in the area'! So ... I summoned up my courage, and did just that. And, I'm so glad I did.
First ... imagine the kindest German family you can ... living in a wonderfully cozy home, eating traditional German food, trying with all their might to make a semi-vegetarian (at the time) foreigner feel like part of the family. The mother greeted me with a joyful hug I can still feel, then led me to my room. (Keep in mind ... I'd been sharing a flat in Austria with three other roommates. And, while the flat was lovely, we all slept in the same room. For a light sleeper, that can make for very long nights!) I can still remember walking through the doorway to my room ... it was like I was being serenaded by angels as a ray of sunlight splashed onto the bed ... a vision in white fluffy down. I was in heaven. Unfortunately for Oliver - who was my primary host and travel guide during my visit - it was his room. Poor thing ... I have no idea where he was banished to during my stay. I felt kind of bad ... but, I still slept like a baby.
At this point, I had been taking intensive German for a semester and had been living in a German-speaking country. So, I was fairly confident in my ability to converse in German. Oliver spoke English ... but his parents only spoke a little. I wasn't worried. But, then we sat down for a meal. And tried to communicate. I was baffled ... I could only make out every few words. Even when they spoke s-l-o-w-l-y ... no clue. Just quick glances at Oliver to indicate a need for him to save me. How in the world had I forgotten all my German over the course of a train ride from Austria to its neighboring country?!
The next day, I was ready for a drive across the country. Yes ... across the country. It took exactly 34 minutes ... with stop lights.
They have an actual lived-in castle ... Vaduz Castle. Liechtenstein is governed by a prince who lives in the castle with his family. Actually, the way I understand it ... he has some power, but he also appoints a Prime Minister who, along with some other ministers, make up the government. And, the castle ... it's actually more like a medieval fortress. Incredible!
We took a chair lift up into the Alps at Malbun ski resort. Breathtaking! OK, I know I mentioned that I would leave out facts ... but I just have to include these because they're about the Olympics ... and I LOVE the Olympics:

We even attended a rousing game of bingo. It seemed like the entire town was there, and it was quite fun. I was excited because I thought that, despite my inability to converse with Oliver's family, I could certainly still do my ABC's and 123's. OK ... not so much. I think it went something like this:

And, so went the ENTIRE evening. I felt like a complete idiot.

So, here's the secret. Liechtensteiners speak German ... with an Alemannic dialect. I later learned that this particular dialect is 'highly divergent' from the standard German I'd been taught. For me, that dialect changed the language so much that they might as well have been speaking Italian.

So ... if you ever get to Liechtenstein, drive 'across' the country, take in the Alpine beauty, view a fairy tale castle, and visit with the friendly and hospitable locals ... and most definitely become familiar with the phrase, "Sprechen sie Englisch?"

Oh, it sounds awesome! I want to go!

Did he just say D-45? Ha! I have always wanted to be bi-lingual, but I am so NOT gifted in that department.

What a great experience. I'd love to go there. I've lived in Switzerland and visited Austria, but I never got to Liechtenstein. I'm just going to have to go back over there. How could I have overlooked such beauty?

Corey - Too funny! At this point, I can barely converse in any other languages either! It's true that when you don't use it, you lose it ... quickly!

Lotus Girl - I know ... it's like a blink of an eye as you travel between Austria and Switzerland! I would have missed it too, had I not known people that lived there!

How lucky for you to be able to experience a different culture like that! (I'm so sheltered!)

That sounds like my kinda place! Thanks for sharing :-)

Kelly ... thanks for your comment! Actually, that was in my junior year of college, and it was my very first plane ride ever ... well, except for the one I parachuted out of a few years earlier ... but that's a completely different story! :-)

Katie - Most definitely! I can't wait to go back!