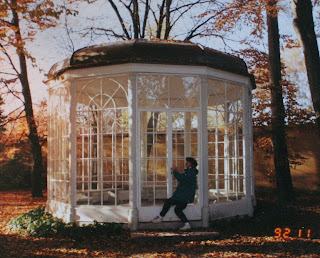 It was a very cold, snowy night in December. Our gas-powered fire was pretend-crackling and I had a million things to do before Christmas arrived. I was quickly flipping through the television channels in search of something entertaining to keep me awake while I accomplished my never-ending list of “to-do’s”.

I found "The Sound of Music" and was hopelessly drawn in. I got very little done for the rest of the evening, and went to bed way past the time I had hoped for.

Sure, I've seen it a dozen, maybe more, times (though never from start to finish). Yes, I know the story, but certain details sometimes need refreshing. Yes, the song lyrics have long been ingrained in my brain. Nevertheless, I still had to watch it.

Maybe because it is such a gentle, hopeful movie about the love of family, standing up for what you believe, and holding on to the hope that "when the Lord closes a door, somewhere he opens a window..". But, I think it's also because it reminds me of my time as an exchange student in Austria, including a funny little incident involving a certain gazebo in Salzburg.

We traveled to Salzburg in November. My most vivid memory is that of hillsides crowded with trees in every shade of autumn you could possibly imagine, against a brilliant, clear-blue sky. It was like walking into a painting. It was gorgeous.

I also remember our long and comical search for the famed gazebo from 'The Sound of Music'. Just when we were about to give up looking, we found it. Locked! Hours of walking, and it was locked. I could see inside, but it wasn't the same. I wanted to be inside where they had filmed that touching scene between Maria and Captain von Trapp.

So, I did what any reasonable college student would do. I started pulling and yanking on the door. Not that I thought I would get in ... my roommate and I were laughing to the point of tears when she took this picture.

Nonetheless, I still do believe that when God closes a door, somewhere he opens a window ... just not the one to 'The Sound of Music' gazebo.
Posted by Kelly H-Y at 1:42 PM

Why in the world would anyone lock a gazebo???

Such a great movie. It might be time for me to rewatch it!

Hello! Ever so happy to meet you. That was a lovely story...amazing you actually found the gazebo. Sorry about bragging about our weather...I July I will need to remember why I live here in the desert. **blows kisses** Deborah

What a beautiful gazebo, though, and in such a pretty location. It's a great memory you'll always have, bringing you back to those carefree years!

Lucky girl to get to visit there!
I watched the Sound of Music a few weeks ago with my daughter (her first time watching it). She had learned the So Long Farewell song in Music and asked for the CD for Christmas. Love those songs! Fabulous movie!

I had a teacher who always used that expression, "When God closes a door..." Sometimes I get so impatient waiting for him to open the window!

Seems like, more likely, the door opened was the one inside your mind. One that has a story to tell; in blogland, as well as fiction. Story-on! You go girl! :0)

Funny photo!
When we were there five or so years ago, the guide said they had to keep it locked because so many American women kept falling as they danced around inside!
I think the whole Sound of Music thing puzzles the Austrians, but it's one of my favorites!

I'm a fellow Sound of Music lover! I wanted to do a biking tour of the Salzburg region this summer, but my husband nixed it. He probably feared that I would keep singing "Doe a deer!"

Thank you for your birthday wishes. When is yours?

You are hilarious, Kelly! The thought makes me smile!

Ohhhh, I LOVE that scene and the movie. LOVE it. Glad you got in :). Sometimes God gives us the will to pull a bit harder on the doors :).

What About The Girl? said...

Oh I can imagine! I would have done the same thing!

I just got my kids to watch that movie last week for the first time! They loved it!!!

And wow, what a trip! I'm so jealous (trips like that seem like they may be impossible now that dh has been doing so poorly...)

I think the picture might make the whole being locked out thing worth it, right? I mean it's sort of awesome that you've got photographic evidence of yourself trying to break into the Sound of Music Gazebo! Way cooler than just having a normal picture of yourself inside the gazebo.

I'm filing this under the "you can't make this $%(^ up category!

are those Reeboks you are wearing :)

Very true. Sometimes one really has to search for that window, because it's not always the one right in front of us, but it is there. Thank you for the reminder. :)

Thanks for the inspiration this morning! What a funny story.

I love "The Sound of Music." I am exactly the same way - even though I've seen it a billion times, whenever it's on TV I just have to sit down and watch it. The gazebo scene is one of my favorites :) That is so, so amazing that you got to go to Salzburg. I would love to go there one day... it's on my list of places to go before I die. I'd love to see the Mozart festival and all of the Sound of Music landmarks!

Now I have to go there.

Oh Kelly, you have no idea how this post tugs at my heart. I've had one of those weeks where God has started some early spring cleaning. You know, even before I started reading it, I looked at the picture and hummed, "I am sixteen going on seventeen..." I just love that movie! Now if only I could get the hubby to watch it with me. He did pretty good until we got to that scene, lol!

What a great post! I can't imagine how breathtaking Salzburg must have been. Love the gazebo pic. I wouldn't mind watching The Sound of Music again. It's been a while.

What a sweet story. Love your determination, and that picture.

No one could hope for a kinder gazebo interloper than you. What a great story.

Half Gaelic, Half Garlic! said...

What a wonderful story...... how cool that you got to go and visit...but such a let down that you didn't get in!!

I am a firm believe that when God closes the door, somewhere, he is opening a window.....

Thank you, everyone, for stopping by! I love your entertaining, sweet, fun comments!
And thank you to Becky, for setting us straight on why that gazebo is locked in the first place!!! I had no idea!

Oh my word, I love that movie. I could watch it over and over. I used to sing and run around with my hands flung out like Maria in the meadow. And I can't tell you how much I wished my mom would make me clothes out of curtains--okay, maybe that was a really short phase, but how cool you got to see the gazebo!

Your life, little girl, is an empty page that men will want to write on (To wriiiiiite on!)...

It's embarrassing how I can sing ALL the lyrics from the Sound of Music...and will, given the slightest opening (like this blog post :-)

Okay, I had to comment here as well.
the Sound of Music is a family favourite.

Such a great movie. It might be time for me to rewatch it!
free internet jobs