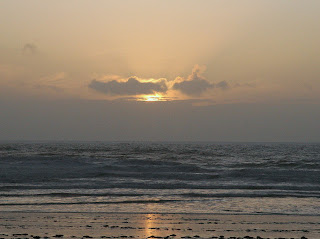 We had just purchased our beloved morning mochas and lattes at a local coffee shop in the small, coastal town of Manzanita. My husband and kids were waiting outside, as my dear friend and I exited the building, steaming drinks in hand. We were chatting as I held open the door for both of us, then quickly glanced behind me to see if anyone else was coming before letting the door close.

Just as my hand let go, I noticed a man – possibly in his late 70s or early 80s – walking up the ramp to the door. I grabbed the door to re-open it, saying to him in a cheery tone, “I’m so sorry, I didn’t see you coming!”

He smiled in a peculiar way and shared a hearty “Thank You”, as we exchanged responsibility for holding the door open. But, he didn’t proceed through into the warm coffee shop.

I stood, smiling and nodding. And, then watched as – halfway through his diatribe – he let go of the door without looking … just as my friend’s husband was walking through the open door, hands and arms piled full with his drink, his son’s drink, and a coat. He quickly caught the door with his elbow before his piping hot coffee became a part of his wardrobe.

The man – still ranting about the lack of manners belonging to us Generation Xers (if that’s the generation he pegged me for) – was completely oblivious to what he had just done.

My husband, friend, and I – all having heard the rant – fought to keep our laughter at the irony of it all at bay until the man was in the building, and we were alone outside.

I’m inclined to be of the opinion that a lack of manners does not necessarily ‘belong’ to a certain generation. I’ve witnessed politeness and courteousness, or a lack thereof, across all age groups. I’ve observed 5-year olds holding the door open for those coming behind them; 65-year olds doing the opposite; and vice versa.

My very unscientific conclusion is that manners maybe have less to do with the generation you happen to be born into, and more to do with what you have been taught by example, what you have observed, and trying to be aware of and involved in your surroundings.

So, I will continue sharing a friendly smile, and maybe a ‘hello’, with passersby, waving a ‘thank you’ to those who stop their car to let me cross the street, and holding the door open for those coming behind me. And, I’ll expect my children to do the same on behalf of Generation Z.
Photo: October Sunset in Manzanita
Posted by Kelly H-Y at 4:40 PM

oh, what a tale. i can see a number of people I know doing such a thing. or at least some.

the other day my dear husband let a door close right in my face and it in fact damaged an arm that was already in pretty bad shape.

i thought, well. this probably would not have happened in the 1950s.

It's amazing how little bits of kindness really can make a difference. You just never know what kind of impact it might have...

That's too funny. I'm glad your friend's husband didn't end up wearing those drinks. That reminded me of an ironic incident from way back and I might just have to blog about it sometime. Thanks for that. :)

Oh, I agree with you. I'm amazed at how many rude people span the generations. I was taught to have manners, and I hope to be teaching my children the same thing. It isn't an age thing, it's an individual thing.

It's funny how sometimes we're guilty of doing the things that annoy us when other people do them. :) GOod for you though, and I agree. Manners has little to do with one's age or generation.

*wonders what will come after generation Z*

Funny story and Well said. I have noticed a decrease in the last ten years of common courtesy of retail or customer service people. But overall, I do think it is how you were brought up and not the generation.

Oh gosh. It is striking when things like this happen!

Well said, Kelly! Having been a teacher, I can tell you that children live what they learn!

(And P.S. You are such a sweetheart! Thanks for the lovely comment about my poem over at Enchanted Conversation. May 2010 be the year when fairy tales come true for you and yours!)

Oh, the irony! :) I know so many people like that. Well told story!

Yes, a well-told story. It builds well. And it's is SO funny!

I agree: rudeness is ageless. I like how you drew a bigger picture from an ordinary snapshot of life. And speaking of images, lovely photo too.

I'm always afraid that I will get curmudgeony when I am old(er). I'll remember your story when I start feeling cranky about the whipersnappers.

I know the little town of Manzanita!

Well recorded. I want to walk in back of you!!

I remember when I used to attend debate tournaments in the south, how the guys were sooooo good about holding the door. I always wished guys (and gals) would be better about that on the west coast.

I think you're absolutely right, Kelly. It's not a generational thing for the most part. And that is too funny and ironic!

I love Manzanita - maybe my favorite beach town. What a great setting for this timeless story. O. Henry couldn't have done the irony any better.

Oh yes, there are a few lessons in that story! Isn't is fun to shock people with unexpected kindness!! Thank you for your kind words about my dog, Bear. She has probably dug a few holes by now too! **blows kisses** Deb

Thank you for all your wonderfully fun comments ... I love reading them!

LOL! great point! We all tend to be oblivious to the fact that we are often guilty of what we accuse others of.

What a lovely blog you have Kelly and I happen to agree with you.

I am so sorry to hear that your Mom has metastatic breast cancer. Mine too is metastatic and that is not an easy fate.

Oh how funny! And so true. I don't know how you continued to chat without laughing...that must have been difficult!

You're so right. Good manners are learned by example and not by generation. I hope your friend's husband was okay. Hot coffee....ouch!

"manners maybe have less to do with the generation you happen to be born into, and more to do with what you have been taught by example"

It's amazing how little bits of kindness really can make a difference.
free internet jobs