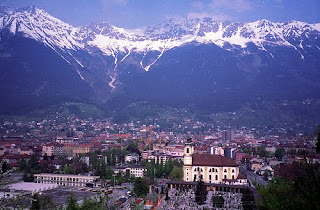 This is a re-post from about a year ago, with a few minor updates. I've been thinking about Austria lately, and this is one of my favorite memories. And, I'm so thrilled for the upcoming Winter Olympics, I can hardly stand it ... so there's a bit of Olympic trivia at the end of the post. Enjoy! :-)
One of my favorite memories of my exchange student days in Austria involved a trip to Innsbruck, Austria.
Admittedly, I’d label the majority of Austrian towns as ‘gorgeous and amazing’, but - oh my - is Innsbruck ever cool. It’s situated right in the midst of the Austrian Alps, which makes for great hiking, especially when you’ve been blessed with stunningly beautiful weather.
We visited the Alpenzoo first. Situated 727 meters above sea level and nestled into the mountain, it is the highest zoo in the world. And, as its name would indicate, it is home to animals that originate from the alpine region, showing them in their natural habitat. The Alpenzoo, in and of itself, could be considered a hike for many.
After visiting the zoo, our group split into two and my dear friend, Rachel, and I decided to hike up into the Alps. It was my absolute favorite day in Europe … exhilarating and incredibly beautiful.

Halfway up the mountain, we were joined by Marco from Germany. We had no clue who he was, but he stayed with us for the remainder of the hike. He seemed nice enough, as did all our fellow-hikers that day. I guess back then crazy stalkers weren’t as prevalent on our minds. I’m still quite certain he was a bit enamored with Rachel!
We made it above the tree line and, after a few moments of sitting and taking in the beautiful view and brilliant blue sky, decided to commence the joint-pounding trek down the mountain!
Towards the end of our descent, we passed another hiker who was headed up the mountain. As he passed, he greeted us and asked, “How vas the vodka?”
You know how you respond when you don’t really know what someone has said, but you still want to reply in a friendly and jovial way? You kind of do a hearty laugh and throw your head back like you ‘get’ the joke or the funny comment even though you haven’t a clue as to what they actually said?
That’s what we did. And, I think we added something like, “Gut … sehr gut!”
We giggled as we tried to figure out what had possessed him to ask us about vodka. I mean, we knew these particular hills were alive with music, but not vodka-drinking hikers.
It wasn’t until a few laughter-filled minutes later, that it dawned on us what he had really asked.

“How was the walk up?”
To this day, Rachel and I still laugh about that story. And, it just goes to show that the hills are alive … with music, yes … but also with fresh air, exhilarating views, and very friendly German-speaking hikers. No vodka required.
~~~~~~~

Now for the trivia! Just so you can impress your friends and family with your vast knowledge of international Olympic trivia, here are a few interesting tidbits about Innsbruck:

That is such a funny story! I would love to visit there someday.

Ha! I think I might want some vodka for that kind of hike....

Funny!
And it looks GORGEOUS!

You always have the best stories. Thank you for brightening my day.

That's a lovely dress you're wearing.

Our family's version of your story.
Thanks for the chuckle.

Oh I mastered that laugh and head toss for when I had no idea what people were saying. Sometimes it got me into terrific messes.
Fun story!

I've seen how those Germans drink. It wouldn't surprise me at all to find them at the top of a mountain pounding vodka!

What a fun story. Gotta love those tales which keep providing giggles through the years.

You know how you respond when you don’t really know what someone has said, but you still want to reply in a friendly and jovial way? You kind of do a hearty laugh and throw your head back like you ‘get’ the joke or the funny comment even though you haven’t a clue as to what they actually said?

Great story! And what a fabulous photo. My parents went to Austria on their honeymoon and still remember how beautiful it was ... (51 years ago)

Aren’t you lucky to have been an exchange student in Austria. That is a funny lost in translation story. I actually ran into German hikers in the Alps who had canteens full of alcohol. Honestly!

How funny! And what beautiful memories!

I like that story. And I just loooooove that you've been to Austria!!

Oh girl, this story is priceless! Ya sure had this Ozarks farm chick rollin' off the hay-wagon. You pic is marvelous!

From the hills and hollers of the Missouri Ponderosa, ya'll have a wonderfully blessed day!!!

I love that story!

And I remember the 1976 Olympics. I watched them from the comfort of my lime-green beanbag chair. I believe I was wearing yarn bows in my hair.

im so xcited about the olympics! love it!

Lovely family - and how lucky you are to have traveled! It was fun to read about. Thanks for sharing!

I think I might want some vodka for that kind of hike....
free internet jobs