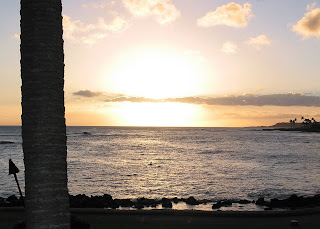 When you read about how to be an effective writer, you often hear the phrase, "Don't tell .... show." Don't just tell the reader that your character is sad, show them. Don't simply tell the reader about the beautiful landscape, show them. And, sometimes, that's easier said than done.
Recently, though, I overheard a statement that was the perfect example of 'show'. It has haunted me a bit, and will continue to be a vivid reminder of that rule when I write.
Last month, an acquaintance of mine marked a devastating one-year anniversary. That of the death of her 15-year old son. Unbearable ... unimaginable ... a parent's very worst nightmare. Her middle of three children. All of them her pride and joy. She was at work as a personal trainer when it happened. She saw the coverage flash across the TV screen in the workout room, and realized they were covering a horrific accident in the same intersection her son biked through on his way home from school. The call came minutes later. He had been hit by a bus. He had not made it.
As I learned more about this amazing young man, I grieved - along with so many others - over the lost potential and unrealized dreams. Even at such a young and tender age, he was a prolific and gifted writer. Wise beyond his years. A year before his accident, he'd written an article entitled "Please Don't Run Me Over" ... the topic being about the dangers of biking on our roadways, and the responsibilities of both drivers AND bikers.
I can't imagine what it must be like to recover, as a parent, from such a tragedy. I suspect that it's a day-to-day, sometimes hour-to-hour and minute-to-minute, process. I suspect that everything is different, including your definition of 'normal'. There is a new normal. And, even though you know they are in a place without pain ... a wonderful, comfortable, happy, bright place, you still desperately want them here with you.
The other day, I was doing my weights, and she was training with a client in the area right next to me. It was a beautiful morning, and the client made a comment about how lovely it was to see the sun shining. She agreed, paused, and then - without a single hint of self-pity - said, "Someday, maybe I'll be able to feel the sun when it shines again."
A striking and haunting description of grief, loss, and hope. My heart immediately started aching for her.
One simple sentence that conveyed all the emotions tied to her unbearable loss and was so impactful to those listening. And, a vivid reminder to me of how to show, and not just tell.
Photo: "Sunset in Kauai" - October 2007
Posted by Kelly H-Y at 12:14 PM

Oh...wow. That is so powerful.

And not to detract from your friend's story--but the way you wrote it was very moving as well.

That is such a wrenching story. Full of grief and compassion. Thanks for sharing.

Given the context of that sentence, one can hear thousands of words behind it.

Wow. This is so sad. And you've written it up so well.
How tragic.

I can't imagine the pain of losing a child. Her sentence summed it up exquisitely.

Wow. It brings me to tears to even imagine what she is going through. I'm not sure how one does get over a loss like that.

PJ, Sherrie, and Kelly - I know ... it's just beyond unimaginable. Thanks so much for your comments.

Oh that has me unable to see any keys to type. A poignant spoken moment of grief...

Kelly, great example! I remember when my mom died (not at all on the same level as losing a child) I felt the same way as if frozen in a block of ice, angry that the spring sprung regardless.

Also, I can't believe the "forshadowing" in this boys life; to write such an article just a year before! Unbelievable!

Sheri - So true. I've heard similar thoughts before ... that it doesn't seem right that the world just keeps going when it seems like your own world has come to a halt. Thanks for sharing that.
And, you are so right about the foreshadowing ... it's almost eerie.

Wow. I can't even imagine.