Listen to the Wind 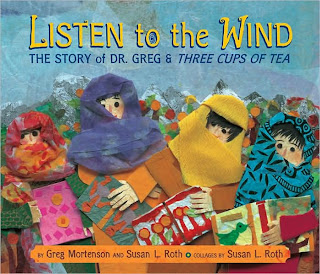 Surprising ... I know ... that a picture book writer would end up purchasing the picture book version of the story before the original, adult version! :-)

And, no, it wasn't just that I wanted the abridged version! :-)

The story of Greg Mortenson, who has now helped to build 78 schools (78!!!!!!) in the remote regions of Pakistan and Afghanistan, is over-the-top phenomenal and inspiring. This man sold everything he owned to raise money to build the first school in Korphe, a small, remote village in the mountains of Pakistan. He sent letters to 580 prominent Americans, businesspeople, and celebrities asking them to help. Of those 580 letters, one was returned ... with $100 ... from Tom Brokaw. I've always known there was something about Tom that I liked!

Greg Mortensen has survived an armed kidnapping and endured and persevered despite multiple death threats ... all to promote a very simple and effective concept: Peace through education.

The picture book, "Listen to the Wind" is stunningly gorgeous. The illustrations are collages created by Susan L. Roth. My 6-year old son was overwhelmed by them. He couldn't believe that someone had created the pictures using scraps of paper and material, and kept repeating - with each turn of a page - "Wow, she's good!" (in reference to the artist!).

The story, itself, is quite a concept for a child to wrap their arms around. That these children from Korphe did not have a regular indoor school to attend was a bit worrisome to my son. However, the fact that their lessons were held outside and they wrote with sticks in the dirt initially sounded very appealing ... like the school of his dreams!

The story continues on to explain how that first school was built. First, they had to figure out how to get the supplies from one mountainside, across a river, to the next mountainside. The whole town came together, with Greg, to build a bridge. Once the bridge was complete, they could then transport - by foot - the supplies needed to build the school. A true labor of love.

Men, women, and children all came together to build that first school. This is truly an amazing story of a community coming together for the sake of its children ... to give them an education, so they could grow to be leaders with agendas of peace!

It also was a great prompt for a discussion with my son ... about this particular region of the world; about what many of the children would be learning about if it weren't for these schools; and about the organization - Pennies For Peace - that continues to raise funds to promote education in Pakistan and Afghanistan. A penny may not be much to us ... but there, it can buy one pencil, thereby promoting literacy and learning. And, one dollar ... it can fund one child's education for a whole month. Wow!

A beautiful book with a remarkable message of community, hope, and peace.
Posted by Kelly H-Y at 11:56 AM

Wow! Fascinating. Thanks for sharing that, Kelly.

Sounds like a powerful story, and yes, wow, those collages are beautiful!!

Whew! You sold me!

Now I would love to read them both.

thank you for this recommendation. I recently learned about this book (I read Three Cups of Tea last year) and was wondering how it was for kids...

I agree with your son...wow, those illustrations do look good!

Thanks for stopping by everyone! LOVE reading your comments!! :-)

I've seen that book about Dr. Greg but I haven't picked it up. Now I think I will. It sounds like a great story. Thanks!

Three Cups of Tea is on my list too. you have added a new one for me. Thanks!