I Wish I'd Thought of That! 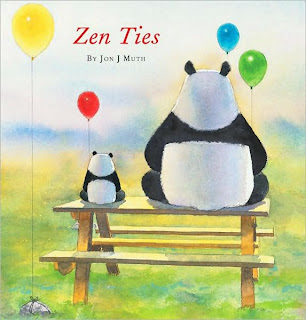 Clever, that Jon J. Muth. I'll admit, I have yet to read the Caldecott Honor-winning Zen Shorts, which came before Zen Ties. But, I suspect it's just as brilliant.
Mr. Muth subtly introduces young children to haiku in this engaging tale. The main character, Stillwater (a rather large talking panda) has a nephew named, Koo. When he meets him at the train station, he says (you can all say it with me if you see where this is going!), "Hi, Koo!" So, so clever. And, Koo only speaks in haiku ... yep, he's got 17 syllables to say his peace. And, I have to say ... he is very artful with those 17 syllables!
Not all may agree with me, given that there is a lot of dialogue in this children's book ... but, I tend to write that way too, and love how well the dialogue works in this book.
Not only does it introduce the concept of haiku in such a clever way, but it has a beautiful message of compassion and respect ... without being overtly didactic.
And the watercolor illustrations ... well, they are simply mesmerizing. Vivid, yet sweet, with a nostalgic feel. They captivated and entertained my almost-4-year old even while I was explaining the Hi Koo / haiku wordplay to her! :-)
I highly recommend Zen Ties ... and am now looking forward to reading Zen Shorts!
Posted by Kelly H-Y at 3:31 PM

Thanks for the recommendations, Kelli!

Nice to meet you.

I was going to paste the link without permission because I had very felt the interest for your blog.

Please link me with the blog if it is good.

You won the Hiccupotamus giveaway! Please email me at corey at hopplop.com with your address and the names that you would like the dedications made out to for each copy.

Too cute! Will definitely have to pick this one up for the kiddies!

I love Zen Shorts so I'll totally pick this up!

Corey! That is awesome! I am so excited! I will e-mail you. Thanks!

There are so many things that I wish I had thought of — and I marvel at those who found the thought before it sauntered in my direction.


(and I'm thinking of you and your mom)

Thanks for the info and the recommendation. This looks like another wonderful picture book...and we all wish we had thought of that too.

What a neat was to introduce Haiku. Thanks for the review.

What a cool idea! I'll add it to the list.

Sounds good.. Adding it to Kaci's Christmas list. :) Thanks!

I love the concept and the illustration. I’ll have to take a peak next time I’m in a bookstore and think of a little one who would enjoy it. Great review!

What a wonderful, creative way to introduce kids to haiku. Very, very cute.

Writing this one down on my "To Read" list.

With my youngest at age 8 I'm a bit out of the loop on books like this. It sound fantastic though. I love haiku.

I love this suggestion! I've got one poetry lover in the house so far. This would be a great way to introduce him to haiku.

Oh, this does look just adorable. Love it!