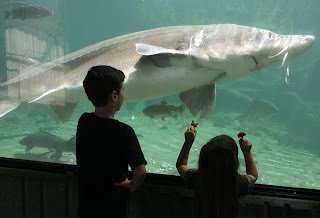 Last week, hubby and I took the kids to the stunning Bonneville Fish Hatchery in the equally-impressive Columbia River Gorge National Scenic Area.
Before actually going there, I would have never guessed I would be referring to a fish hatchery as 'stunning'. But, it is. The grounds are simply gorgeous. I walked around clicking pictures and commenting continuously on how beautiful everything looked.

The main attraction, however, is not the landscaping. It is Herman the Sturgeon. I couldn't help but think how perfect a character Herman would be for a children's picture book.
While myths abound, the true facts about Herman are limited in number, but staggering to the mind: 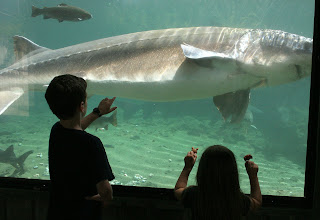 My son and daughter thought he was a riot. As he nonchalantly swam by, my son waved; while my daughter excitedly showed him her Pet Shop pups ... ya know, just in case he was in to that kind of thing.

As for me ... I'm still wondering about the picture book possibility. Looks like I've got some research in my future!

Sounds like a great idea for a picture book! I say go for it.

I love it! Herman the Sturgeon! I would soooo read that book to kids.

I've never seen a live sturgeon that big!!!!!!!!! Holy fish! I love how your daughter showed the fish her lil pets.

oh my gosh, I've seriously always wanted to see a sturgeon, having read of and written about them for FLOW.

Your daughter showing her toys — it kills me.

Herman the Sturgeon is a great idea.

Herman is impressive alright! I bet there are many picture book possibilities with him. Sounds like a fun idea to pursue!

Kelly - Me neither ... it was crazy! And there were others in the tank that were probably in the 8 foot range!

Beth - I never knew they got so big! Yes ... her little Pet Shop toys got to see all the fish at the hatchery with us! :-)

Eileen - I think so too ... I don't see any existing ones out there. I'll have to do a bit more research!

Very cool! We took our kids to the North Carolina Aquarium at Pine Knoll Shores. Herman looks like a shark they had there. I LOVE the idea for a picture book. Go for it!

Whoa! That thing is HUGE!

What's the difference between an aquarium and a fish hatchery? Is it the same? I love going to giant aquariums...they're always so peaceful!

Sooo.... a little girl tries to make friends with a giant old sturgeon? You've got the makings of a great story right there in your photos! We always see the signs but have never stopped there. I bet we will now!

Herman is amazing and totally picture-worthy!

Oooh...love that you've found some inspiration at the aquarium! Can't wait to see what comes next...

I recently went to the Baltimore Aquarium w/my folks. Lots of big, ugly fish there. To me, fish are like dogs. They should all be small and cute. Guess I should stick to enjoying the fish tanks (and food!) at Legal Seafood.;-)

Amy! I thought he kind of looked like a shark too! Thanks so much! :-)

Stephanie - Great question! While aquariums are generally for viewing, the hatchery is actually working to produce fish. They have an egg incubation bldg, rearing ponds, spawning room, holding ponds, etc.! It's quite a process!

PJ - Isn't he something else?!

Lisa and Laura - I know ... it's fun to find inspiration when you're not even looking!

Debra! Too funny! Yes ... Herman's not the cutest fishy out there!

My daughter is super into fish right now.. Great idea for a picture book. :)

Keri! Your daughter would have LOVED seeing Herman!!

Doesn't inspiration strike in the most wonderful places? Follow it...chase it down!

It is stunning! I first though Herman was a shark. Great photos. You bring back happy memories of taking my kids to the aquarium in Boston.

Hi there...this is Herman, posting to you through the help of some of my friends at the Bonneville Gift Store. Glad you enjoyed visiting me- I love making new pals. I've been thinking that a book would be great, a lot of people are interested in my life story. I also have a facebook page, feel free to "friend" me.
Herman

Sarah - I thought he looked like a shark too! Glad it brought back happy memories!

Herman! What a treat to have you as a visitor! :-) I'd love to write your story!

Diane - Kids' reactions are the best, aren't they?!

Oooo! How awesome! Need to go there with the kids again some time!