When Your Child Gets Published Before You Do... 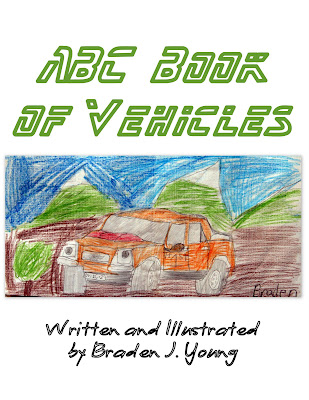 My son's third grade 'Young Authors' assignment was to write and illustrate an ABC book. He chose 'Vehicles' as his subject ... one for every letter of the alphabet - from Ambulance to Zamboni!

It was a long two months of researching facts about each of the vehicles and creating the final drawings. Somewhere around Ice Cream Truck, my usually eager illustrator was clearly considering the illustrations to be a cumbersome task; and the idea of typing the words on the computer - originally such an exciting prospect - became dreaded. But, he (and I!) made it, and was thrilled with the end product.

One evening, not long after turning it in, I got a call from his teacher. She loved his book, and wondered if she could buy it for her grandson, a fellow admirer of anything with wheels.  I joked with her, "My son's going to be published before I am!"

We created a second copy for her grandson. My son received his very first payment in exchange for his first 'published' book. And - after overhearing my comment to his teacher - he now tells everyone that he published a picture book before his Mom! :-)

Which is just fine with me. I was, after all, one of the people to whom he dedicated the book ... and, really, what more could you ask for?
Posted by Kelly H-Y at 4:24 PM

How sweet is that! LOVE that he sold a book..and even more that he dedicated it to you!:)

Aww, this is adorable! You can be one darned proud mom.

That is the kind of awesome memory money can't buy! (Even though getting paid for his book was AWESOME!) What a wonderful teacher! And what a super mom--congrats!

What a great story! How proud he (and you!) must be!

Haha, that is awesome :) Congrats to your cute kid!

Oh, how wonderful. Congrats to your son!

Adorable!!! How cool is that?!

Very exciting and in the THIRD grade! Wow, that's a seriously big project to tackle so high five for him.... and you for all the help you put into it.
Cheers, jj