A HUGE congratulations to my sweet friend and writing club partner, Rachel ... who just finished the first draft of her novel!  Such an incredible milestone!  She has turned a fabulous idea into a future bestseller, I'm sure of it!

I first met Rachel in Vienna, Austria, of all places.  We were exchange students ... she was from Texas; I was from Washington.  I have such fun, fond memories of our adventures there.  In her honor ... I'm re-posting "How Vas the Vod-ka?" below, which recaps an exhilarating and equally hilarious hike we took together in the Alps.

One of my favorite memories of my exchange student days in Austria involved a trip to Innsbruck, Austria.

Admittedly, I’d label the majority of Austrian towns as ‘gorgeous and amazing’, but - oh my - is Innsbruck ever cool. It’s situated right in the midst of the Austrian Alps, which makes for great hiking, especially when you’ve been blessed with stunningly beautiful weather.

We visited the Alpenzoo first. Situated 727 meters above sea level and nestled into the mountain, it is the highest zoo in the world. And, as its name would indicate, it is home to animals that originate from the alpine region, showing them in their natural habitat. The Alpenzoo, in and of itself, could be considered a hike for many.

After visiting the zoo, our group split into two and my dear friend, Rachel, and I decided to hike up into the Alps. It was my absolute favorite day in Europe … exhilarating and incredibly beautiful.

Halfway up the mountain, we were joined by Marco from Germany (I couldn't resist snapping a picture of him during one of our hiking breaks ... he's the one on the left, in the bushes!). 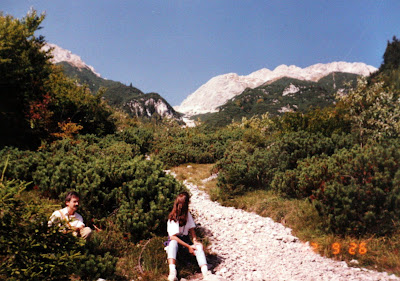 We had no clue who he was, but he stayed with us for the remainder of the hike. He seemed nice enough, as did all our fellow-hikers that day. I guess back then crazy stalkers weren’t as prevalent on our minds. I’m still quite certain he was a bit enamored with Rachel!

We made it above the tree line and, after a few moments of sitting and taking in the beautiful view and brilliant blue sky, decided to commence the joint-pounding trek down the mountain!

Towards the end of our descent, we passed another hiker who was headed up the mountain. As he passed, he greeted us and asked, “How vas the vodka?”

You know how you respond when you don’t really know what someone has said, but you still want to reply in a friendly and jovial way? You kind of do a hearty laugh and throw your head back like you ‘get’ the joke or the funny comment even though you haven’t a clue as to what they actually said?

That’s what we did. And, I think we added something like, “Gut … sehr gut!”

We giggled as we tried to figure out what had possessed him to ask us about vodka. I mean, we knew these particular hills were alive with music, but not vodka-drinking hikers.

It wasn’t until a few laughter-filled minutes later, that it dawned on us what he had really asked.

To this day, Rachel and I still laugh about that story. And, it just goes to show that the hills are alive … with music, yes … but also with fresh air, exhilarating views, and very friendly German-speaking hikers. No vodka required.
Posted by Kelly H-Y at 2:33 PM

Wish you were coming to NJ-SCBWI, too. Maybe next year???

That was hilarious! What a great memory.

Hee hee hee. Oh, I can imagine you two still saying that to each other (fake accents and all) and cracking up.

Congratulations to Rachel and best of luck to her. That's a real milestone.

Funny story too. It wasn't that off - hiking in the Alps, we broke out our waters at the summit and these Austrians were drinking something stronger out of their canteens.

Nice to have you back to blogging too.

First, congrats to Rachel - I hope I'll be where she is one day soon!

Now, are you SURE he wasn't asking about actual vodka? I mean, maybe they have some for the hearty souls who have made it up the mountain. In my case, going DOWN is harder than going UP (knee injury) so vodka would definitely help out!

What an amazing memory! I lived in England for two years and I'm still kicking myself for not getting to Austria. I have a friend who wants us to ski with him there, though, so perhaps we'll get out there someday before long.

I love this about traveling and about people :)! the vodka is sure to be good :). Drinking or not!

Ha! That is a fun memory/story!

Congratulations to Rachel on finishing her first draft! I love the vodka story!!!!