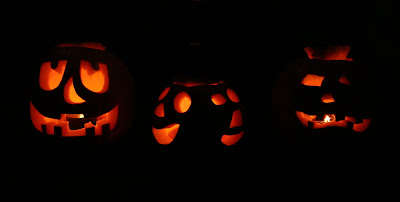 Children's imaginations never cease to amaze me. They think big ... they have no limitations ... they aren't bound by reason.
These lovely pumpkins were created by my hubby, 5-year old daughter, and 8-year old son. See the one in the middle ... the one with two faces (puppy faces, mind you!) ... that was the creation of the 5-year old. She actually wanted to do three faces on her pumpkin, but it was a bit too small.
My hubby thought the idea was brilliant. After all, why does a pumpkin have to have only one face? He's got it all planned out for next year ... three faces carved into one large pumpkin ... which is then placed on a spinning, lazy susan-like tray!
So cool ... and, all because of a 5-year old's imagination.
Posted by Kelly H-Y at 9:15 AM

Love your pumpkins! And I second your 5-year-old's great idea to do more than one face on a pumpkin. Please post photos of next year's creation.

I love Jack O Lanterns!
Yours look great!! This year was the first year I did minimal help with carving with my kids. I was very impressed with how they turned out!

What a great idea. Your daughter is brilliant!

That's great. I love the idea of the revolving Jack.

ha. i was getting ready to say i love the two faced one...kids are so cool and creative...hope you had a wonderful halloween...

Two face puppy pumkin! Love it - though I'd do kitties of course ;)

Seems like just yesterday that we packed the little ones up and headed out to your local patch. I remember the muddy, bumpy wagon ride. In fact, it may have been before you even had your little ones! Such a fun afternoon of pumpkin carving and seed roasting! I miss those days!

Love the pumpkins! The double facer is awesome. Terrific photography too. My 16 year old son now does our carving.

WOW! Her pumpkin is WAY better than mine! The multiple face idea is incredible-no boundaries!! :)

My son made a 4 headed one last year!! I love yours!

TO WONDERFUL! What talent that took, great job all!
Sandi

Wonderful idea! And those pumpkins are amazing. I've never actually carved one before; your talented kids have inspired me!