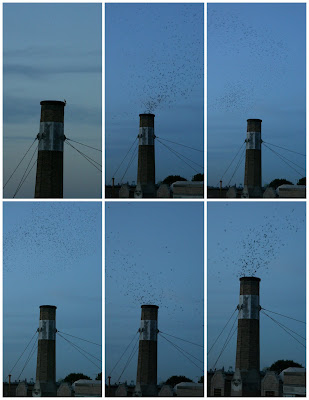 An amazing display at sunset.

The Vaux's Swift birds migrate south each fall. The chimney of Chapman School in North Portland has been their chosen September roosting place since the 1980s. Each night, at sunset, thousands of the little birds make their way into the chimney to rest for the night.
Last night's display featured a predator ... knowing the sun was setting, waiting atop the chimney for its prey. After seemingly watching from above and waiting for the predator to leave, one little swift succumbed to the much bigger bird, so that his friends could make their way into the chimney for a night of rest.
As their name would imply, they are quite the little aerialists ... always in constant, swirling motion. At times, their flight patterns seemed to take on the shape of cylinders, as they prepared to dive into the chimney. Controlled and chaotic, all at once. Another miracle of nature.
Posted by Kelly H-Y at 10:36 AM

Aren’t Chimney Swifts incredible? We have a flock that roosts at the old high school. When it was torn down to build a new school, the architects incorporated a new structure just for them. I hope they return. Great photos, but I’m sure you agree that the spectacle is even better live.

Nature is amazing isn't it? Love the pictures.

Wow. I love learning about things like this. That's really cool. Thanks for sharing it!

They remind me of the Starlings we'd watch each Autumn in California. They're memorizing to watch.

Wow! What an awesome tale in pictures! Thanks so much for sharing them with us. :-)

Wow. That must have been amazing to watch!

Animals are so amazing. Lovely photos.

what day did you go? we may have been there that night??!!!