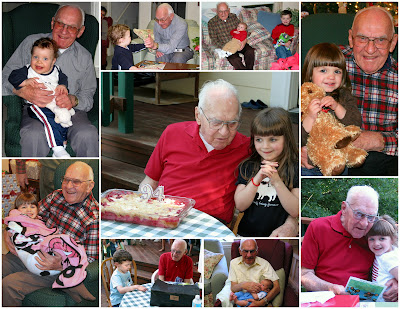 I was fairly convinced my Grandpa Don would live to the grand age of 100. My son, just days ago and out of the blue, prayed that his Great-Grandpa would live to claim that century-old mark.

He had struggled over the past few years. Throughout his lifetime, he was an avid walker … literally logging multiple miles per day well into his 80s. When his legs started getting weaker and tripping became more common, he reluctantly gave up his outdoor walks and purchased a treadmill. Eventually, even that became too much for his legs.

This last July, he turned 94. In the days before that life achievement, he had reluctantly moved into a retirement home, selling the house that he had built with his wife and lived in for 60 years. My Grandma passed away 18 years of days ago. He missed her terribly every one of those days. I suspect he stayed in that house for so long because so many memories of grandma still existed there.

He was a sweet, kind, generous, wise, and unassuming man. His smile lit up his face. He adored and admired each and every one of his 3 daughters and sons-in law, 11 grandchildren and their spouses, and 24 (and counting) great-grandchildren.

For several summers in a row, in my pre-teen years, he and grandma would take my sister, Heidi, and I on long road trips, fifth-wheel trailer in tow, visiting wonderful sites in the western United States and Canada. To this day, they are some of my fondest memories of Grandpa. And, they were his too. Being in his 90s seemed to make those memories even sharper for him, and he would ask, “Kelly, do you remember the trips we used to take?” And, then, we would proceed to laugh about the time we saw the baby bear in a campground, or the time we waited out a tornado warning, or our regular requests from Grandma for ‘just a smidge’ of ice cream … which was code for ‘lots of ice cream in a huge bowl’.

When I picked up my daughter from school today, I told her that her great-grandpa Don had gone to heaven this morning. “That makes me so sad,” she said softly, but then pepped up when we started talking about him being in heaven with the Grandma she never knew.

As we were driving to daycare, she asked, “Mommy, are you crying?” “Yes, sweetie … Mommy’s a little sad right now,” I responded. “Would you like a hug when we get to Judy’s (daycare)?” she asked gently. “Yes, that would be very nice,” I said with a smile.

Both my children adored their Grandpa Don. My daughter, though, had an amazing connection with him that started when she was just a toddler. She seemed to gravitate to him … wanting to be near him … even in the midst of Christmas gifts and cousins, she always made her way to where he was sitting, either to help him unwrap a gift or sit on his lap.

One of their last memories of him will be when we visited his new apartment at the retirement home. My son thought the miniature version of a house that Grandpa was now living in was so very cool. And, my daughter got the pleasure of riding on the seat of Great-Grandpa’s walker as he pushed her around the first floor of the building.

I am thankful for the time my children had with him.

I am thankful for the time my husband knew him … he adored my husband.

I am thankful for all the wonderful memories I have of him.

I am thankful he lived a long, mostly healthy 94 years. I am sad that it ended with a fall that injured his head and brain in a way that he couldn’t recover. I am sad that he was in pain during his last couple days. But, I am thankful that the pain didn’t last any longer.

I am sad that he is not here on earth with us anymore. But, I am thankful that he is now in heaven, enjoying a beautiful, long-awaited reunion with his beloved wife.

Your grandfather sounds like a wonderful man. My condolences to you and your family, but I'm so happy that your children were able to be close to their great-grandpa! That is so rare and lovely!

This is a heartwarming tribute to your grandpa. Such a blessing when you can share some of the lovely memories of him with your children.

Wow, how wonderful that he got to meet 24 great-grandchildren!

What a wonderful man he was. He clearly loved you with a huge, powerful love. How special that your children got to know and love him too!
I'll be thinking about you and your family.

Sounds like a wonderful man. I'm sorry for your loss, and will keep you in my thoughts and prayers.

I’m so sorry for your loss. He sounds and looks like a most special person. You were lucky to have him in your life. It must have been hard to say goodbye. I send you a cyber hug and a box of Kleenex.

I saw the picture & the tears started! We had great memories together with him and grandma. I am so happy to know he has finally got the reunion with grandma he has wanted for so long! Smiles to that!!

I read this and cried.

My thoughts are with you.

Kelly, you are a beautiful writer. I feel so honored you've stopped by my blog so I could make your acquaintance. I'm so sorry to hear about this dear man, but your beautiful tribute to him put a tear in my eye, so I know his spirit is strong and will live on in many different ways, through your heart and of those who loved him, and through your writing. But it's okay to miss him. He's left a huge hole in the earth and in your heart through his absence. I rejoice with you that he's now reunited with his beloved!

I'm sorry for your loss. I wish I knew him. He sounds like a stellar human being. I bet he's partying in heaven with your grandma though. No pain, no tears, just joy :)

Thanks, Kelly! What an awesome tribute!

oh sweetie - I am crying rigth now for you. :( sorry for your loss but happy for your memories.

He sounds wonderful. I am so glad your children and husband got to know him and love him. And such a blessing that he was so healthy for so many years. Hugs to you and your family as your mourn.

I'm so sorry for your loss. Your Grandfather sounds like he was a lovely man. You're so blessed to have had so many years with him, so that he could get to know your children and he, them. You and yours are in my best thoughts.

This is a wonderful tribute. I'm so glad you children got to know him so well.

What a beautiful words to honor your grandfather. {{hugs}}

Thanks to all of you for your kind and thoughtful comments ... they are so very much appreciated.