Last week was unexpected ... it felt, in many ways, as if we were in the midst of a nightmare; and, simultaneously, had a gazillion little moments that filled me with an overwhelming sense of gratitude.

I mentioned my son turning seven one moment, and the next being incredibly sick for the first time in his life. After my post last Tuesday, his condition worsened. Over the remainder of the week, our little man endured blood tests, additional exams, a CT scan (requiring an IV, poor thing!), and – finally – a visit with a specialist. One by one, different possibilities were eliminated, and we ended up - despite an initial negative mono test reading – with a diagnosis of just that.

Thankfully, he’s turned the corner. Little ones rarely get mono but – when they do – they bounce back much quicker than the 14 – 25 year olds it usually invades! We can see it already … his sense of humor, his desire to play more, the color coming back to his face, the absence of a fever.

We are so thankful for this outcome … and for all your good wishes and prayers. And … the moments that filled me with gratitude … they were the concern from so many, including family and friends who were calling and texting daily to check in on his condition. And, the magnificent doctors and hospital who – despite us not having any pre-scheduled appointments – flawlessly worked us into their existing schedules on a same-day basis in order to quickly determine what was attacking his little body so they could fix it! And, my son, who despite being in pain and feeling so horrible, uttered not one single complaint. So brave.

On a lighter note …

TOOTH FAIRY PAYS DOUBLE! A lost front tooth brought a smile to our son’s face in the midst of a week where smiles weren’t coming as naturally and frequently as they usually do! And, we discovered that the tooth fairy pays a bit extra for pain and suffering when the tooth’s owner is under the weather! 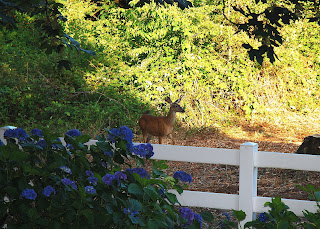 WOULD THAT DEER LIKE A BUCK? We’ve been dining outdoors … and, on a regular basis, have been joined by our deer friend, who dines on the blackberry leaves at the same time. One evening, as the deer started walking away, our 3-year old hollered, “If you stay, I’ll give you a buck!” She then pretended to pick up a dollar bill and toss it to the deer, while we erupted in laughter at the irony of her choosing to bribe the deer with – of all things - a BUCK! 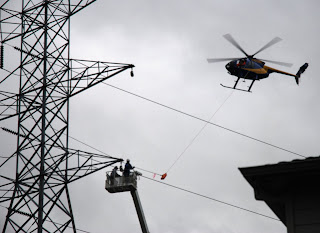 PLEASE LET THAT BE A HIGHLY TALENTED HELI PILOT! We’ve had much activity over the past few weeks in the green space behind our home. First, the towering maples came down. Then, the ‘placeholder’ lines were strung – by helicopter – to the electrical towers, in preparation for the real electrical lines to be pulled through. Helicopters are tricky to maneuver … so, I must admit to my heart pounding just a bit faster than usual as this one flew sideways, backwards, and very slowly over our house, as it strung the necessary lines! Oy!

Have a wonderful and healthful week!
Posted by Kelly H-Y at 2:24 PM

I am so relieved for you! So glad to hear that your son is feeling better. I've never experienced Mono, but I hear it's just horrible - bless his heart!

Kelly, I am so relieved your son is feeling better and they figured out what he had, I wonder how in the world he got it. You know, it’s also called the kissing disease… My sister had it as a teen and I remember some of her teachers came to our house to keep her on top of school. I remember she was mortified to have this one male teacher in her bedroom when she was so sick and gross. Nowadays, I can’t imagine we’d even allow a teacher into a teen’s bedroom… Anyway, you must have been terrified for your son.

They are putting up electric lines in your backyard? Are you angry?

Did you hear back from the bug man?

Oh, I'm glad they got to the bottom of it What a relief that it is something with no long term effects.

I'm glad they were able to figure out what the problem was. And I'm glad that you're little guy is on the mend. :D

Oh thank goodness everything is ok with your son! I've been thinking about you guys.

Wow! How scary your week must have been! I'm so glad your son is feeling better and that it wasn't anything too serious. I remember when our daughter was little, she's 22 now, and how often she got sick and we had a few scary moments as well. I guess it's just part of being a parent. But the good times far out way the bad. ;o)

Thank you, Amy ... us too! I haven't experienced it either ... thankfully, the little ones bounce back quickly. The swelling and stiffness in his neck will take 6-8 weeks, but he should be good to go with normal activities later this week!

Sheri! Wow ... that's quite a housecall! Yes ... apparently it's rare in little ones and somewhat difficult to pass/receive! He'd had a cold prior to that, and I think the antibody was in that ... his body got run down ... and voila ... the full mono kicked in! We've had 3 electrical lines in the green space behind our back yard, which the trees had previously hidden ... now, no trees, and they're adding more lines. Not what we'd hoped for! Waiting to hear from the bug man!

Danyelle ... thank you! It's good to see him regaining his color, energy, and smiles!

Lisa and Laura - Thank you so much! We are relieved!

Phyllis! You said it! Also, as a parent, you'd just like to plop yourself in their place, so they don't have to go through it!

I'm so glad to hear your sweetie is getting better. What a scary time!

Wow, what a week for you! Glad to hear all is well with your son and love the buck story...children are so perfectly hilarious sometimes :D

So so glad he's diagnosed and doing so much better. I never mind when doctors are late for scheduled appointments, and this is a perfect reason of why.
Take care!

I'm so glad your son is doing better. What an awful lot to go through!

As for the buck, I love when kids make totally innocent statements like that. Precious 8)

So glad to hear that your son is on the mend. That's so scary. My heart stopped while reading. There is nothing worse than a sick child. The worries that implode are horrendous.

Your little one is sweet-- A Buck--did you explain the irony of that?

Take care and I hope you have a much more uneventful week ahead to catch your breath and peace.

I'm so happy to hear that all is well. I just got mono last month, which is sad when you consider how old I am. Luckily, it was a pretty mild case, and my hubby is a doctor. ;)

Gosh, I missed a week or so...glad your young'un is on the mend. Loved your buck story; I have a green belt and river that runs behind my house, and a funny kid/buck story. But I don't think I can share it on a family blog :-) Oh, I CAN share the joy of seeing all those beautiful hydrangeas!

I am so sorry to hear about your son, although at least it was mono and not something worse. I had it in England when I was 21. It is very debilitating. Funny buck story!

thanks goodness. what a week!

I'm so glad your son is doing better. Hope no one else in your house gets it! :)

Kelly I'm so glad you're lil guy is on the mend. It's so hard to see your child go through medical tests and feel so bad.
I giggled a little at the extra tooth fairy $. My son got extra $ once too, but it wasn't because he was sick, it was because we were on vacation and his sister was sleeping next to him and she "got sick" all over him!
I love your dinner visitor, too!

I am so glad your son is okay. How scary! Good luck with any further recovery. And *hugs*

Tess ... aren't they hilarious!? I don't know where it came from!

PJ ... that is such a great point! I've always thought that of OBs, but now I'll be thinking the same of any doctor!!! What a great perspective!

Sherrie - Thank you! And, yes ... perfectly innocent and out-of-the-blue - hilarious!!

Thank you so much, Eileen! Yes ... we did try to explain it ... our son got it, but I'm still not sure the 3-year completely understands the irony of it! Too funny.

Carrie ... you poor thing! I hope you are doing well. The specialist said kiddos bounce back MUCH quicker than teens and adults, so hope your healing is speedy!

Thank you, Sarah ... so true! We were so relieved it turned out to be that and not any of the other things they were checking for!

Shelli - That's for sure!

Lazy Writer - So far so good ... everyone else has stayed healthy!

Kelly! Oh my goodness ... your poor son ... yes, that definitely deserves extra $$ as well! :-) You're so right ... it's hard to watch your child have to be poked and checked ... you wish you could take their place!

Lady Glamis - Thank you so much!

Please forgive me for not knowing earlier than just now all you've been through. Testing and the unknown is scary territory. I am so relieved, with all the others here, that your boy is okay.

Best to you (and yay to that helicopter pilot),

Beth! You are so sweet! No worries at all! Yes, we are so thankful ... and I definitely echo that 'yay' for the heli pilot! :-)

Oh my so sorry about you son! I had mono in High School and I was knocked out for so long. I am glad he is on the mend and coming back to himself again.

Good think you were persistent with his care.

Nothing is worse than a sick child. . .seriously.