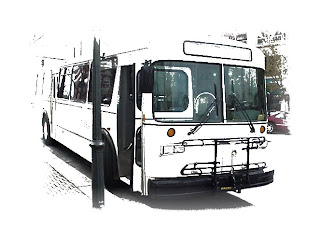 It was never my forte to begin with … taking public transportation. I would like to say that I did it because it was good for the environment and cost-effective. This would be a lie. I did it because I lived and worked in Seattle, and had few other options that didn’t cost me the equivalent of a month’s wages.

Our Seattle office of, oh, 275 or so employees had approximately 17 spaces crammed into the teeniest of spaces between multiple cement beams in the dungeons under the building. Parking was given to those with more seniority than I had at the time. My name was permanently on the parking-spot waiting list, in the hopes that one of the lucky parking spot owners would have a business trip or take a vacation day and I could use their space.

My other option was public parking in the downtown Seattle garages. The cost was somewhat staggering, but I always felt it was worth it when I did it. I used it way too often. Please don’t judge. Let me explain. Truly, it wasn’t just because I got to sleep a bit longer. And, it also wasn’t because I considered my dear automobile (which was quite fuel-efficient and considered low-emission, by the way) to be my ‘little piece of heaven’, which I did.

Let me give you just one example of my typical bus ride from West Seattle into downtown, and maybe you’ll understand where I’m coming from.

My bus route originated in the – ahem – rougher part of a little town that bordered West Seattle. My lovely little apartment complex sat on the side of a hill on the east side of West Seattle in a sort-of-okay neighborhood. In the fall and winter, I would walk up the hill from my apartment to my bus stop, darkness surrounding me in the early morning hours, hoping no one was going to jump out of the bushes. My plan of attack, if that did occur, was to use my high heels as weapons.

My stop was one of the very last before crossing the bridge and heading into downtown, thus the bus was often quite full. One piece of advice I’d been given by a seasoned bus-riding co-worker was to never, ever sit in an empty seat if you had the option of sitting next to someone who looked like they might make a decent bus-traveling companion. Better you choose who you’re sitting next to, rather than someone choose for you! Wouldn’t have thought of that myself.

One morning, I climbed onto the bus to find it completely packed, save one seat next to a lady. Perfect. I smiled at her as I quickly sat down, noticing that she looked like she had had a rough night.

I could feel her stealing quick glances at me, most likely calculating my friendliness-level and debating whether she should ask me what she wanted to ask.

I turned my head to look at her. Oh dear. What to say … what to say.

“Well,” I said, making the motion of a finger-sweep under my own eye, “you’ve got something here … and here.” Technically, her eye-liner and mascara were smudged beyond repair under and to the sides of her eyes. I gently attempted to guide her as she rubbed it off her face.

“I’ve been up all night,” she offered, “I had to work late, and close, and then this guy wouldn’t leave …”

“Oh, I know,” I nodded understandably, “that’s so hard. Well, don’t worry, you look fine. I think you got everything rubbed off.”

I thought we were done.

“My hair is a mess,” she continued.

“I wouldn’t worry about it … it looks fine,” I continued to encourage, noticing that it was a bit matted in areas.

“Do you know how to French braid?” she asked.

Are you kidding me?

It was at this point that I had a serious debate in my head. I didn’t want to lie, but I was pretty sure I didn’t want to braid her hair even more. Would she know I was lying? I mean … here she was, sitting next to a girl with long hair. What girl with long hair doesn’t know how to French braid? Well, technically, I never did learn to French braid very well … so, in principle, it wouldn’t be lying to just say I didn’t know how.

“No, sorry … I never did learn how to do that,” I responded. “I always wanted to though.”

I’m not exactly sure why I felt the need to add that last comment. Thankfully, it didn’t open up an offer from her to practice my French-braiding skills on her hair during our bus ride that morning, and the remainder of the commute was travelled peacefully.

So, there … just one of my many Seattle bus stories. And one of the reasons my ‘little piece of heaven’ trumped public transportation.
Posted by Kelly H-Y at 3:32 PM

Oh. My. Goodness.
For the record, I don't do french braids. In fact, my hair is always awful. But I will never ever ever ask you to fix it for me. Promise.

Wow. I think I would have paid for the parking as well.
*still can't believe anyone would charge that much for a day*

I used to have to take public transportation for school and work. Fortunately I always caught it when it wasn't too packed. :D

Just so you know, I can do a mean french braid. It's one of my few God given talents. Although, I'm not sure I'd be willing braid some random woman on the bus....

I live in a small town, so no public transportation available. But I can only imagine the mix of characters on the bus!
I am one with long hair who never learned to french braid! (My poor daughter-I'm not the mom who sends her girl with perfect hair each morning. I'm just not good at it!)

Wow! I can't French Braid, and I have looong hair. My mom tried to teach me but my fingers just wouldn't obey!

$105 a day!? I suppose if I made enough money in my salary that might be worth it, but right now, that's valuable grocery money. So it would either be the bus or go hungry. LOL. French braiding a stranger's hair... hmmm... I don't blame you!

Beth, Danyelle, Lisa/Laura, Kelly, and Lady Glamis!
Love all your responses! Just for the record ... I was truly kidding about the $105 per day ... it was only like $10 per day!
I was somewhat relieved to see there were others who hadn't yet perfected the French braid technique! We'll see how I do on my daughter when she starts asking! :-) I'm much more willing to practice on her than on a stranger! :-) I might need to get a few pointers from Lisa and Laura!

I love "your pick your companion" rule for travel – how fun! It reminds me of my friend who met her agent when she sat next to her on a bus. Life is full of good surprises and not such good ones, but for a novel, that would be a fun character.

I hate taking the bus. I did it for a year when working at a certain major hospital around here that has no parking.... ;)

I ended up not applying for a full-time job there just because I didn't want to deal with the bus every day. ha!

i would have done the same thing. Then again, I would have prob said - yeah ill trade you a braid for a pedicure! ha!

I had a couple of "interesting" bus moments when I lived in downtown Milwaukee. Not fun.

I've never had a good bus experience so I don't blame you at all!

This is a classic example of why it's so completely impossible to answer, "Is it ever OK to lie?" when the boys ask.

Hello Kelly, I love your blog. I'm not sure if you remember me but I am helping plan a 20 year high school reunion and I believe you were one of my classmates. At least I hope I have the right Kelly Hoeckelberg :o) Anyway, if you are my classmate from the class of '89 Kamiakin H.S. please go to www.kamiakin89.com. Even if you are not planning on attending, I encourage you to register. So many of us are already on facebook as well so hopefully you'll join us there too.

Anyway, I want to spend more time checking out your blog, it looks great but I'm working on at play that opens tonight so I'm kind of busy as you can imagine.

Feel free to email me at robxis@comcast.net. I see you have something in common, we are both HR Consultants. I'd love to network with you on that if you are interested.

In case you or anyone you know writes romance or a genre with romantic elements, I thought I'd invite you to visit my blog. I'm having a contest for romance writers. Check it out.

Sarah! Isn't that a great rule ... I thought it was such good advice! Ohhhh, to find an agent that way! :-)

C.R. - Interesting moments like those always make the best stories!

Sherrie! Thank you for the affirmation! :-)

Rob - Wonderful to hear from you! Hmmm ... now everyone knows my age! ha! I'll check out the website ... thanks for the info and good luck on the play tonight!

Lynette - Thanks so much for your kind words. Yes ... I love your blog! Thanks for the contest information!

Gosh, I don't miss my days of NYC subway riding either! I remember riding it once when I was seven months pregnant and HUGE and not one person offering to get up.

One of the upsides to public transportation: gives you a memorable story!

I love your blog!

Sauyma - You are SO right!!! And, thank you so much for visiting!