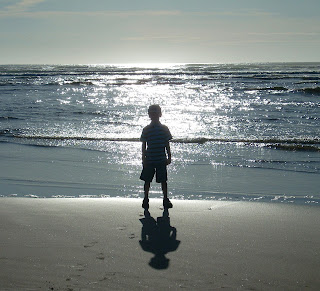 I must admit, when I first packed up my apartment and headed south from Seattle, WA to Portland, OR ten years ago, I was reluctant and a bit teary-eyed. My bonus was going to be living with my hubby ... we'd been commuting between Seattle, where I worked, and Portland, where he worked, for four or five months. The I-5 corridor is lovely, but quickly gets old when you're driving it so very often! My company had an office in Portland ... thus, the reason for me making the move rather than hubby.

Anyone who has experienced the loveliness of Oregon might wonder why I was hesitant to make such a move. Both states are green and beautiful and filled with mountains and valleys and all sorts of natural wonders. And, Oregon is less ... drizzly!

It was the water. And, no ... not the variety of water descending from the sky.

Seattle sits between two major bodies of water ... the stunning Puget Sound to the west, and beautiful Lake Washington to the east. And, in and amongst those major bodies of water are more bays, rivers, lakes, and creeks than you can imagine. I had become accustomed to seeing crisp, blue water everywhere I went ... I biked along Lake Washington, and ran and walked along the Puget Sound. It was not only beautiful ... I found it completely calming.

And, here I was ... headed to a city with a river ... a single, not-always-so-blue river. Secretly, I wasn't pleased. Yes, there were lakes and creeks and all that stuff too ... but it just didn't seem as expansive ... as accessible. 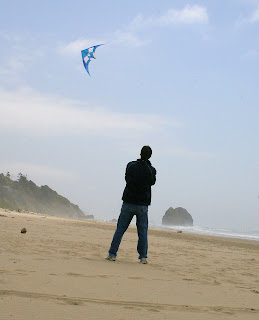 But ... I quickly realized that I had increased my accessibility to the mother of all bodies of water ... the gorgeous Pacific Ocean. This made me quite happy. In under two hours, we could be at the beautiful Oregon Coast, playing on the soft-sand beaches. The roar of the ocean and the warmth of the sand - even when the air is chilly - tops my ultimate relaxation list!

We headed there this past Memorial Day weekend. It was perfect! Technically, the picture at the top of this post isn't from our most recent trip ... it's from last August, when it was a bit warmer and the water a bit sparklier from the sun's rays.

This breezy beach weekend, however, proved to be perfect for kite-flying! So, the stunt kite finally got a good workout! 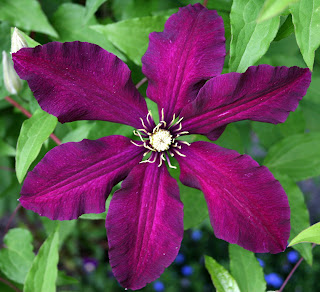 And, as an added bonus ... we arrived home to find this beautiful first bloom on the clematis ... a perfect ending to a relaxing weekend!

I am soooo with you about the water. I haven't been up to your stretch of the Pacific, but I hear it's a lot like California's Central Coast. There's a tiny beach town there that I like to vacation in. Nothing going on but the ocean. It's awesome - even when it's chilly. ; )

I certainly wish I lived in Oregon. My mother grew up there. We visit there all the time. It is one of the places that my husband and I have on the top of our list to move to if possible. He'll definitely apply for jobs there!

The water is amazing, I agree. I love the rocks and the weather and the Tillomook cheese. :D

I live on the East coast, so I'm partial to the Atlantic. And even though I don't frolic in the waves like I used to (I mean, nobody wants to see my body parts jiggle anymore), I must go down to the seas again (with plenty of sunscreen and a good book)whenever possible.

Thanks for the calming words. And the lovely clematis.

Beautiful pics. I would love to get down that way.

The bloom is beautiful! And I'm glad the weekend was wonderful. It sure sounds that way!

I miss the west! I want to come back! Oregon sounds so lovely, along with perhaps being soggy enough that it doesn't catch fire so readily. :D

How pretty. Someday I hope to see the northwest for myself!
That's a gorgeous clematis. We used to have them climbing all over our mailbox.

Gorgeous! Looks like a fabulous time. I also live where I can get to the beach in less than 2 hours. It's heaven on earth, isn't it?

I've never been to Oregon, but I would love to. It looks amazing!

Great beach pics, what a great idea to fly a kite on the windy beach. How fun!
BEAUTIFUL flower picture!!

I’ve been to “the other” Portland once for my cousin’s wedding. We drove to the absolutely breathtaking coast. How lucky you are to have it 2 hours away and to have lived in Seattle, another beautiful city. Fabulous clematis photo – mine have yet to open. Nice to connect with you!

The weekend was amazing! You are so lucky you got to this beach last weekend. We only end up there about once a year, and even then only a day trip (and it's usually freezing!).

So fun to hear from everyone ... thanks for stopping by!!!

Gorgeous pics.. Sounds like you had a great weekend.

I'm with you on the water too. I moved to the Jersey shore to be closer to it.

I was in Oregon just once, years ago. My father spent some childhood years there and I have memories, beautiful ones, of the landscape.

And that clematis is gorgeous.

Ok, I've never been to Oregon and this totally makes me want to visit!

We're in Cleveland. City of river fires and polluted lakes.

Have I mentioned how jealous I am?

It is always energizing to get close to the ocean. Glad you had a wonderful time. Love your clematis--beautiful color!

I would love to visit both oregon and washington some day! I think both must be incredibly lush and beautiful - relaxing on the eye.

i know what you mean about needing to live near bodies of water. I live on a river and I love it. It is a part of our life. I can't imagine not living near it. And whenever I do see another house that I love, the first thing I think is, it's not on my river though.... I need to be near water.

Oh, being around water would be nice! There is something very calming about hearing the waves and even the seaguls at water's edge.

Thanks for joining my blog. I look forward to getting to know you more through yours.