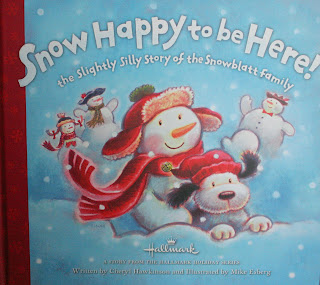 Little did I know, until we received the first in the series as a gift a couple years ago, that Hallmark published their own Christmas picture books. The first book - "The Snow Must Go On! A Way, Way Off-Broadway Adventure" - shifts the focus away from the North Pole ... to the South Pole.

The penguins and snowpeople of Antarctic Springs are out to prove they can do Christmas just as well as that well-known wonderland up north! So, they decide to put on a holiday show to convince everyone that they, too, are joyful and jolly.

After much rehearsing, they are ready for their debut. But, it dawns on them that all the town's members are IN the play ... which means no one left to watch. No worries ... Santa and his reindeer arrive just in time to watch the show, and - to quote Santa - they prove that "... North, South, East, or West, it's the joy inside our hearts that counts at Christmas!" Amen! Oh, and parents ... make sure that - when it comes time to sing the part of the rock-and-roll penguin - you're ready to do your best Elvis impression! It's a guaranteed giggle every time! 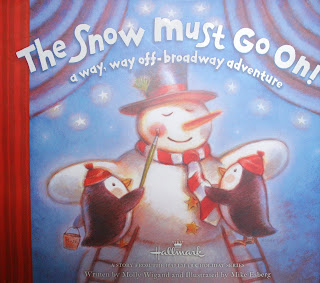 In the second book in the series, "Snow Happy to be Here! The Slightly Silly Story of the Snowblatt Family", the story starts with little Snow-Ellen (Snowblatt Family daughter) asking the question, "Where do we come from, and why were we made, and how did we get here from there?"

Mama and Papa Snowblatt agree that the question is good and thus begins the tale of how snowmen come to be ... from snowflakes falling from the sky to the funny stuff we humans dress them in! An adorable tale with amusing pictures, that ends with a secret revealed ... it's the creator's smile that brings snowmen to life!
Posted by Kelly H-Y at 7:27 PM

Only a few more days to go!