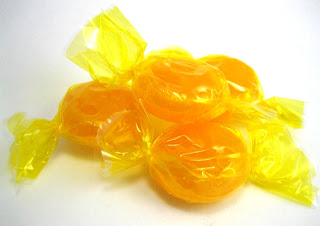 The first time I met Sam, I was in the midst of my strength training routine. As I strained and sweated to lift the weights just a few more times, he came around the corner and – extending an old-fashioned doctor’s bag toward me – said brightly, “Would you like a piece of candy?”

I stopped what I was doing and peered into the open pouch on the side of his bag to find a multihued assortment of hard candies. I smiled and asked, "Are there butterscotch discs in there?”

“Oh, yes … I’ve got those,” he said with confidence as he dug his hand into the bag and plucked out a golden disc.

“Thank you!” I said, with the giddiness of a child surveying her haul on Halloween night.

He turned to leave, then stopped and glanced at the weights I was using, “You know those come in lighter versions.”

I soon learned his very appropriate nickname - Sam the Candy Man. I also learned what a treat it is to watch him work the room of fellow ‘Silver Sneakers’ exercise classmates, offering them candy and bringing joy to their faces.

Outgoing and jovial, his response to the question “How are you, Sam?” is – with 99.9 percent certainty – always a hearty “Super Darn Whoppin’!” And, as if he has planned it because he knows I love them, there is always a butterscotch disc sitting atop the array of sweets when he extends his bag to me.

I do realize there are a couple rules being broken with this story. The first time I was approached by Sam, I did – in fact – take candy from a stranger. The very opposite of the rule we drill into our children’s brains.

Second, the candy is being distributed and accepted at a fitness club where, it seems, most people would be working to thwart the effects of such sweet temptations.

But, these broken rules are countered by the simple happiness and feeling of camaraderie his smile, his kind greeting, and his sharing of a small piece of candy bring to my day.

Recently, Sam was wearing a shirt with the caption “SAM-tastic!” splashed across the front. I wholeheartedly agree. And, to that I would add “Sweet”.
Posted by Kelly H-Y at 6:01 PM

I like the butterscotch ones best too. I won't tell your kids.

What a great story. It is always great to see someone live who they are so completely. I love that he does this little kind thing to bring joy to so many. :)