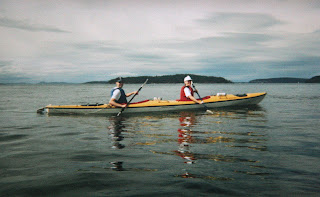 Vast bodies of water are one of my absolute favorite experiences. The power of an endless, roaring ocean; the inspiring sight of a sparkling blue lake; water so still it provides a mirror-perfect reflection of trees and mountains or touched by the wind to create ripples and whitecaps; ferries carrying their precious cargo; boats lining a marina. So much for the senses to take in. 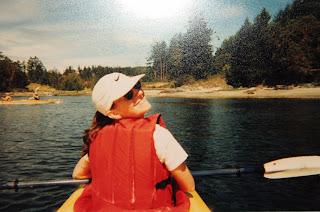 Funny, how I have fear of the very thing I am drawn to. I am interested in looking at it; in being on top of it. I have little desire to be in it or under it.

While my husband snorkeled in Maui; I floated along the top of the water, dipping my head in every so often to take a picture of him. I’ve always considered breathing underwater to be a thing best left for fish! Water skiing was cause for internal struggle. The skiing part was exhilarating; but my delight was tempered by having to begin and end in the deep, dark water.

Thankfully, on numerous occasions, a love for adventure and desire to challenge myself has prevailed over my fear. A trip to picturesque Orcas Island, part of the San Juan Islands of Washington, was host to one such occasion. When visiting Orcas, a popular thing to do is go sea kayaking in the Puget Sound.

Let’s take just a moment to analyze these two words:

Our trip began with a lesson in how to maneuver the kayak and handle a possible tip. The very mention of which caused a combination of heart palpitations and nervous goosebumps. We were led to believe that, if our kayak were to tip over, we could perform a kayak roll using a swift lift-of-the-torso-hip-flicking-paddle-pushing action. I was fairly certain, though I didn’t share this with the guide or my husband, that – if I were upside down in the sea in a kayak – I would be spending more time figuring out how to get my lower half loose from the skirt attaching me to the kayak, and less time perfecting the roll technique.

Thankfully, neither method was put to the test.

As we floated away from the dock, getting a feel for how to propel and steer the vessel with our paddles and realizing the kayak was more stable than expected, the pounding in my chest slowed.

The sights and sounds surrounding us were stunning: water gently lapping against the kayak, hills of evergreens, snow-capped mountains, and blue sky mottled with cotton-ball clouds. It was peaceful, exhilarating, and the fact that I was playing a part in making the kayak move forward and turn filled me with a sense of strength.

As our group paddled out to the open sea, seals poked their heads out of the water to watch as we paddled through their space. A sea plane descended from the sky, landing effortlessly on the water. And, much larger vessels glided by, causing ripples that created a mini-roller coaster sensation for us kayakers. Unfortunately, though … no Orca whales were spotted. We would see them frolicking in the water at another time and place.

When the day was done, I was filled with energy and passion for the sport. My husband and I even discussed the possibility of purchasing a kayak to use on the river back home. Of course, those dreams were tempered by the reality of an apartment balcony that could not accommodate a large kayak and the realization that our visits to the river would likely be few and far between.

The kayak was not the important thing, though … it was the exhilarating feeling of a fear overcome. It’s still not my preference to be in the deep water. But I learned that, sometimes, the deepest water can bring the greatest joy.
Posted by Kelly H-Y at 4:07 PM

What a perfect description of your relationship with water. Hope you get that boat someday, apartment or not.

Water I can't see the bottom of makes me a bit uneasy. I'm a great swimmer, but still, I'm with you.

what a great post!! the experience sounds amazing and the overcoming even better!

Lovely. I'm so glad for you that you were able to overcome your fear and relax and enjoy your beautiful surroundings. When you talked about needed to learn how to roll the kayak over in case of a tip.. I held my breath. I'm with you when it comes to deep water.

Well done you :o) Yes you never know just what is lurking down deep. I use to love swimming out quite a long way in the sea, but after 'Jaws', I was too scared.

I'm with you. I'm scared to death of the ocean, but also love it sooooooo much! (and yes, I was almost a marine biology major and am scuba certified etc.)

Wow! You're brave.
The last time I went on a canoe trip with my husband, our two hour easy paddle turned into a six hour adventure that would not end! I ended up in the hospital with carpal tunnel--this is when I was 23--with an old lady disease!
Now, many years later, he keeps begging me to try again. Your beautiful description makes me want to consider it...if I can't float along as a passenger!

can float along, not can't
I need coffee!

What a wonderful post! Congratulations on facing your fears head on! This post is a metaphor for just about everything that's scary in life: following your dreams, success, love. I have the feeling that your words are going to be echoing in my head for a long time, "sometimes, the deepest water can bring the greatest joy." Thanks Kelly!

I love the deep, dark water :) But I have to say water-skiing wasn't my thing...I could never even get up! My arms are too weak, I guess.

I have a similar love-hate relationship with water. When I was in college, for a while I wanted to be a marine biologist because I was so drawn to the ocean. Then I realized that I'm actually terrified of what lives under the surface. When my husband and I honeymooned in Hawaii, I was all set to snorkle with him, but the first school of fish that swam by freaked my out and he ended up snorkeling by himself the rest of the trip.

I'm glad you overcame your fear and had such a wonderful adventure. :)

Give me a swimming pool! If I can't see through the water I'm a mess!

Well done in overcoming your fear this time. The water looks lovely.

This was lovely! I think I have the same relationship with water :) It's a mysterious, slippery, fickle thing. It can be calm and soothing, or violent and terrible. I'm afraid of it yet I can't resist whenever summer comes :)

Wow! Lovely that such a great experience was so metaphorical. Yay you for overcoming your fear!

beautiful images here. my kiddos love to go visit my mom because she lives by a gorgeous lake and has a few kayaks. It is their favorite thing to do w/ grandma and I absolutely love that they have a grandma who can teach them things like that!

I always say that I was born on an island and I must see the sea at least once a year. We are water people too. We have a cabin near a lake with a ski boat and a fishing boat. We also go kayaking and canoeing. We've never done it on the ocean though. Very brave of you!

Kelly--Thanks for stopping in and reading about my Stripes...it meant a lot that so many people cared enough to leave me comments. Thank you!

Gorgeous photos! I also prefer boating to water skiing, and I’ve never been convinced about a boat that is meant to roll over. Good for you for overcoming your fear! What a payback. I’d love to do it too.

Very interesting insights, and so well written. I love when writers observe the intricate relationships between relatively unexplored elements. You have a new follower :)

Thanks, everyone, for your kind comments and for stopping by!
And ... welcome, Culture Served Raw ... thanks for following and for your thoughtful comment!

That was a great read. Thanks for this.

im the same way - love to look at it - not loving to be in it. oceans scare me and pool arent my thing.

What an exhilerating post of a great experience. Glad you overcame some fears. I love to kayak too.

I love water and being in it--but I can't swim. I make rocks look buoyant. >.< I think I'd be terrified of kayacking. I love that I totally would have been focused on getting out instead of flipping over too. :D

Thank you for all of your sweet comments on my blog! I need to get over here to read your wonderful blog more often! It's always a wonderful delight when I do! Keep it up!

What a perfect description of your relationship with water.
Banner Advertising Network India