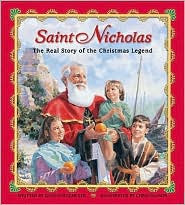 In honor of St. Nicholas Day, which was this past Sunday (I know, I know ... I'm late! :-)) ...
Santa Claus … love him and the joyful spirit of giving he brings to Christmas. I believed in him for a long time. I don’t remember the turning point when I went from a staunch believer to one who believed in the magical feeling he brought to Christmas, but knew it was my parents leaving the goodies. I do remember, over the course of several years, having questions … logistical questions that made me doubt the whole flying reindeer, down the chimney story. But, I never expressed my doubt out loud or asked questions of my parents, nor did I transfer any of my uncertainties to my three younger sisters.

Fast forward to me as a parent … still loving the magical feeling that Santa brings to Christmas, loving watching my children excitedly pour over toy catalogs as they carefully choose what they will request from Santa, and feeling just a tad bit of guilt as they ask a million and one questions about the Man in Red! After all … I’m kind of lying … which, as we’ve ingrained in our children’s heads … is generally enough to put you on Santa’s ‘naughty’ list! Did my parents feel this way? They never said anything to me. My transition was just … natural. It just happened.

So … we are trying, gently, to weave in the true story of St. Nicholas. When I was in college, I did a semester of study abroad in Austria. I was so fortunate to be there during the holidays and experience the celebration of St. Nicholas Day on December 6th. On this day, children awaken to find their shoes filled with chocolate gold coins, oranges, and other special gifts. This day is a celebration in honor of St. Nicholas, a real person who lived in the fourth century and was the very model of love and generosity. While he and his generosity are believed to be factual, they sparked the larger-than-life legends and tales of Father Christmas and Santa Claus.

“Saint Nicholas: The Real Story of the Christmas Legend”, by Julie Stiegemeyer, is one children’s book that paints a picture of the true St. Nicholas via a fictionalized story. It’s a tad overtly didactic (I tend to prefer covertly didactic :-)), but that’s okay, it gets the message across. And, it has a great ‘Dear Grown-Up’ section at the end that nicely details the life of Nicholas, Bishop of Myra.

So … for now, we’ll read this book, talk about the real St. Nick … and hope that Santa and Saint Nicholas (a.k.a. the truth behind Santa) someday in the future meld nicely into one another without drama!
Posted by Kelly H-Y at 12:34 PM

There is another book by Harold Myra called, Santa Are You For Real? We used to carry it in our bookstore. It is the wonderful true story of how St. Nick brought presents to the children, and it explains how we carry on that tradition every Christmas. It also ties in the message of giving to God's ultimate gift of Christ. I highly recommend it. I used it when my son started questioning everything!

Praying you have a blessed Christmas Kelly!

Thanks for the suggestion, Amy!

And you as well, Tamika!

What a fantastic idea! I'd love for my kids to know more about the real St. Nick, rather than the commercial craziness that surrounds Santa.

love it - i try not to say too much. I just tell my kids to believe what they want to. and if they dont want to sit on santas lap they dont have to.

but as parents sometimes you have to lie to help a child keep their innocence. B/c its only for so long.

you guys are great parents :)

I have a fifth grader that has never said he doesn't believe. And he's so smart, he's just gotta know! I wonder if he's just making us happy or afraid that he won't get presents if he fesses up! My other two are true believers though! It does make Christmas morning such fun!

I'll have to check our library for this! It seems like I've seen it.
Thank you for the awesome post.

I'm pretty sure my children know we're Santa...I've overheard them discussing it! This sounds like it would be a fun book to read to them. Hope you and your family have a great Christmas!

That sounds like a great plan to me. It's amazing how St. Nicholas spinned into Santa, really! But I must admit I love the magicalness of it all too.

This is a great idea. I wish I had done that when my kids were younger.

What a wonderful way to gently move your kids from fantasy to reality and still keep the spirit of the holidays. Great idea!

Our township sends Santa around on a fire truck to the neighborhoods. Well, last night he made it to ours. It made my childrens night! I love Santa. xoxo

What an awesome post! I love this idea. I don't think my kids are quite ready, but I am definitely going to take a look at this book. Thanks! :)

I think my boys are in the stage of knowing Santa Clause isn't real, but are afraid to say it out loud in case that would mean the presents might not come. What a quandary they're in.

I think it's funny how there seem to be two camps of kids when it comes to Santa...Camp 1 are the kids who buy the whole show, no questions asked (that would be me). And Camp 2 are the kids who ask a MILLION questions and are suspicious from the get-go (like my husband).

I really don't know much about St. Nick, but I always wanted to include a good book about him in my Christmas books!

How cool. My son has starting asking a lot of critical questions about Santa, so I think I'm going to pick this one up! Thanks for the rec!

How interesting to hear about the real St. Nicholas.

It also ties in the message of giving to God's ultimate gift of Christ.

What a great idea! I have a friend a work who vowed that she would never lie to her children about santa clause, but your soloution sounds like a great compromise.