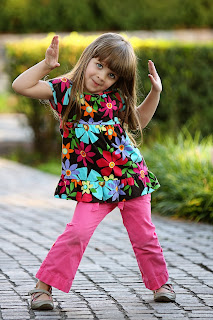 We noticed it when she was quite young ... an adorable ability to feel the rhythm of music.
At 18 months old, a quick glance in the rear view mirror often revealed a little head full of wispy curls bopping along to the exact beat of whatever song was playing on the radio.

Soon, her upper body joined in as her shoulders rocked to songs blaring through overhead store speakers, even as she sat, strapped securely to the shopping cart.
When riding along in shopping carts was no longer an acceptable mode of transportation, the full body jive came into play. It was subtle. She wasn't twirling in the aisles. She was just moving with the beat - from head to toe - as she walked.
This past weekend, we were in the produce section of our local grocery store. A very disco-esque song was filling the area with a lively groove and - as we would expect - the little girl walking just ahead of us started feeling it.
The beat took over her body ... legs, knees, hips, shoulders, head, and arms all coming together as she strutted to the beat in and amongst the pears and potatoes.
My husband could see that our son was feeling it too, so he attempted to give them a quick lesson in disco. "Hey ... do this!" he encouraged, as he reenacted a mini-version of the famed Travolta move involving the index finger pointing up in the air, then moving down and across the body to point at the floor.
Our son thought it was hilarious. Our daughter, however, stopped - mid-strut - and with a very serious tone looked straight up at my husband and said, "I do not like that funky dance."
She then turned and continued bopping her way down an aisle of lemons and limes.

Earlier this month, our daughter turned four with a Hello Kitty extravaganza of a party. The age of four, we are learning, brings with it loads of love, even more hugs and kisses, an enormous amount of spunk, imaginative stories, major meltdowns, serious opinions, a bit more independence, and hilarious moments. Moments that I can't wait to write down before I forget exactly what was said, so I can re-live them whenever I need to inject a smile or laughter into my day.

Hope your day is filled with wonderful moments!
Posted by Kelly H-Y at 4:20 PM

But I love her pretty pretty face!

Ah to be four again and have no sense of shame or embarrassment. *Sighs* Thanks, I really enjoyed this post.

She and that story is just adorable! Four is a wonderful age, isn't it!?! I do have a journal for each of my children and I write down funny things they say and do. Unfortunately I forget sometimes and I can just kick myself!

That totally made me smile! You have to put that in her baby book.

Awww. She is adorable. There may be driving to dance lessons in your future.

She's adorable. I think she looks like you. Don't stifle the bopping. She may be a dancer one day!

Your girl is so pretty! Four is a great age. Happy Birthday to your little one.

I see a win on So You Think You Can Dance? in her future!

I love it! She's a dancer! It must be amazing to watch your children figure out who they are going to be.

Maybe you should watch Saturday Night Fever with her? (Well, um, parts of it.) Maybe she'll like that funky dance when she sees Travolta do it. ; )

Hey, she knows what she likes! :O)

There are so many wonderful memories associated with watching my children and gleaning from the fresh perspective.

I never have a dull moment.

bwhahahahaha!!!!! Love it! Our daughters are very close in age! :)

She is adorable! Enjoy the moments...they pass oh so quickly. Tell Jeff to keep the funky dancing to inside your house. :-)

I have been known to PAY hubby not to dance, so I understand your daughter's pain :-)

It's so great you have this wonderful blog...someday she'll read it (on some micro-sized chip that's implanted into her cornea)and laugh. (At least, I don't think joy and laughter will change!)

I have an award for you on my blog today:

Oh how precious! And don't you just love how those moments always sprout up while your trying to THINK in the grocery store? lol!

What a sweetie pie. Too funny. I'm glad you keep track of her funny comments. I did that for my sons as they grew and have all their little funnyism in a collection and i cherish them because as much as we think we'll always remember certain things.. we simply don't. Reading back over them always makes me say.. Oh yeah! :)

AWW!! You should for sure take videos of her so you can play them for her prom date AND future husband! Or-They can be on her "E-True Hollywood Story"!! She's SOOOOO cute!!!! This story made me think of King Julian from 'Madagascar' with his whole, "We like to Move it, move it" dance! :)

I have presented you with an award. Come pick it up from my blog. Well done.

SPEAKING FROM THE CRIB said...

she is a doll and so sassy! i do not like that funky dance, indeed! great story!

THANK YOU, Stephanie and Sharon, for the awards! You made my day!!!

And, a big welcome to Tamika and Speaking From The Crib!!